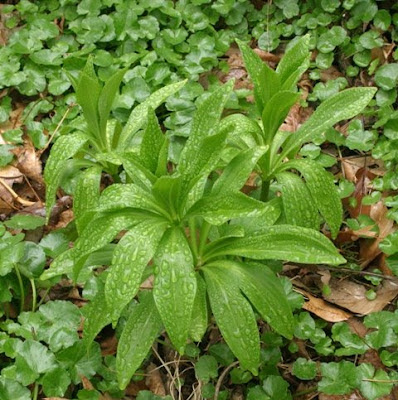 Lilium hansonii is typically the first lily to emerge in the late winter here. It emerges during a period when we are still experiencing overnight freezes. This has never been a problem here, but early in the twentieth century David Griffiths reported that this species, although it had been grown for decades at the Bellingham Research Station, rarely flowered because the flower buds were lost annually to cold. Yet the plants went on to make good growth otherwise.

This species has an interesting history, in some ways an improbable history. It was named by Max Leichtlin, one of the bright lights of late nineteenth century European horticulture, for Peter Hanson, an amateur lily enthusiast of Brooklyn, New York. Peter Hanson? Brooklyn, New York? Not many people would associate Brooklyn with lilies these days, but in his time Peter Hanson was a well known figure in the lily world. For instance, he is said to have corresponded with Henry Elwes and to have grown Cardiocrinum giganteum.

As far as I know, there is no viable Hanson tradition in Brooklyn or anywhere else. What he knew seems to have died with him.

Evidently the Lilium hansonii in cultivation in the west for the first century was clonal in nature. It was not until the middle of the twentieth century that new material of truly wild origin was collected in Korea. Unfortunately this newly collected material and the long existing clone seem to be muddled now.

Lilium hansonii is not a common lily in gardens. It has long had a well-deserved reputation for being easily grown, but it does not appeal to the prevailing taste in lilies. It's worth growing for its handsomely whorled foliage alone.

This is often the first lily to bloom each year in this garden. The image above, made on March 31, 2008, gives an idea of how quickly it begins to grow in late winter and earliest spring.
Posted by McWort at 12:43 PM