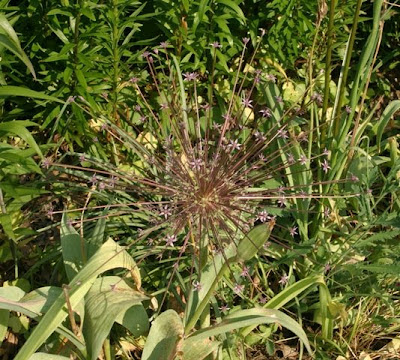 I first grew this plant decades ago but soon lost it. That acquisition produced flower umbels about a foot in diameter, bigger than those of Allium cristophii but not by much. Some books suggested that this species might not be hardy, and I attributed the eventual loss of the plant to lack of winter hardiness. More about that below.

Two years ago, while attending a meeting in the home of some well-practiced flower arrangers, I noticed several dried umbels of Allium schubertii. But these were Allium schubertii as I had never seen it: they were huge, easily eighteen inches in diameter.

That did it. It was time to try this species again. Last fall some new bulbs were acquired – nice big bulbs. The other day I went out and measured the umbel on one: it was twenty-three inches in diameter!

This species is low growing: those huge umbels are only just barely lifted above the ground. And the very muted colors combine with the diffuse structure to produce a nearly invisible inflorescence in the garden. The photo above, for better or worse, shows that well.

Is it hardy? In the past, questions arose about the identity of the material in cultivation: is it A. schubertii or A. protensum? The former was said to be tender, the latter hardy. I have a hunch winter hardiness isn’t the issue with this plant. I’ll bet it’s intolerant of summer wet. I’m not taking any chances: once the foliage on my new plants is ripe, the bulbs will be dug, wrapped in newspaper and stored for the summer in a hot but dry spot.

Later in the summer, after I’ve harvested the mature umbels, I’ll post a better image of those tumbleweeds against a suitable background. Hmmm….that means more dust collectors in my bedroom, doesn’t it?
Posted by McWort at 8:42 AM