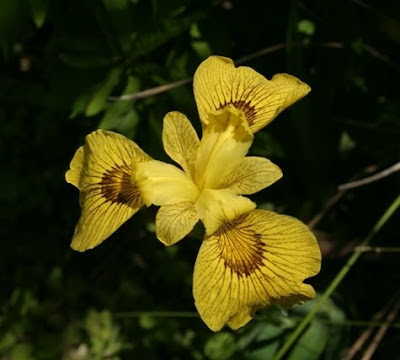 Many years ago I bought a variety of irises from one of the local iris groups. Most but not all of my purchases that day were Japanese irises. When I planted these new irises, the labels were buried under them. I’ve never been able to find the labels, and to this day I am not sure which Japanese iris is which.

Among the non-Japanese irises purchased that day was a beardless iris which I bought thinking it would be suitable for the bog trays. It’s been in the bog trays for a long time and has sulked since day one. There have been a very few blooms on this plant over the years. Last year it finally crept out of the bog tray and rooted into the local soil – and then it took off. This year it has produced more blooms than it has in all the years past. And finally I was able to get some good pictures of the flowers.

The next question is: what is it? The label is “down there” somewhere, but I’ll never find it. In going over my journals from those many years ago, I located a likely name: ‘Roy Davidson’. A quick Google Images search confirmed that.

Love it...but lost my start of it..do u know where i can find a start of roy davidson again very reasonably priced? Other pseudacoros iris also would be nice. :) Thanks.
Deb T.