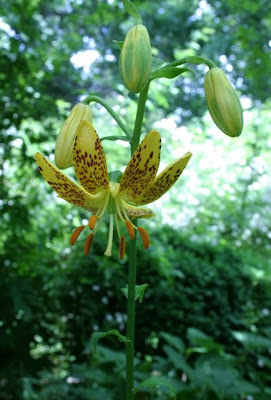 Lily season 2008 began late last week with the flowering of Lilium ‘Preston Yellow’. The honor of opening the lily season typically goes to this lily or to Lilium hansonii, one of its parents. Sometimes Lilium candidum beats these into bloom, but not this year. And sometimes little Lilium pumilum pops into bloom very early – as early as early May once. But Lilium pumilum is a bird of passage in this garden: one never knows for sure if it will reappear year after year, and when it does its performance is erratic.

This name ‘Preston Yellow’ is of the nature of a working name: I don’t think the name has ever been registered. When I mentioned it to another lily enthusiast a few years ago, she responded “ Do you mean ‘Preston Dark Yellow’? “ It has been passed around among a small group of lily growers here in the Middle Atlantic States, and it’s cherished because it takes to our conditions well – something not to be taken for granted with martagon lilies in our area. It is a survivor of the earliest days of lily hybridizing in North America. It was raised by Isabella Preston, an Anglo-Canadian plant breeder active in Canada during the first half of the twentieth century. In lily circles, Preston is perhaps best remembered for some of her Asiatic hybrids, in particular the Stenographer Series which created a real stir in the lily world of a half century ago.

The connection with Preston herself is tenuous: George Slate, active in lily circles in the mid-twentieth century, mentioned what is probably this lily (it had not been formally named) in the Yearbook of the North American Lily Society. It’s possible that it was being grown commercially at one time because I’ve been told that appeared on the lists of lilies distributed by one of the lily societies long ago. It’s also possible that any bulbs distributed originated from the garden of an amateur enthusiast – demand would probably have been very light. The stock I grow came from a friend but originated from that distribution.
Posted by McWort at 11:32 AM