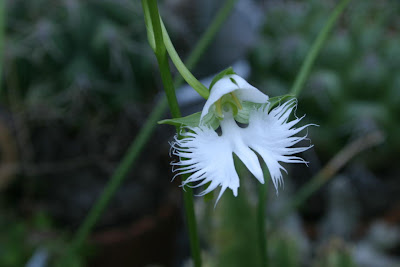 The winsome little bloom shown above is the Egret Flower, a tiny Japanese and Korean bog orchid named Habenaria radiata or Pecteilis radiata. It's very easily grown: the one shown grows in a pot of sandy peat kept moist in full sun. The plant grows from a corm about the size of a sweet pea seed. This plant is winter hardy here and can be grown in bog gardens, but it is so tiny that it is apt to be overwhelmed by neighboring plants.
Among gardeners it is widely known as Pecteilis radiata. This name Pecteilis was coined by one of the really colorful characters in the history of early nineteenth century taxomomy, Constantin Samuel Rafinesque-Schmaltz. He was born into an Italian family near Istanbul in 1783 and died an American citizen in 1840 in Philadelphia. He spent years in Kentucky. Rafinesque evidently didn't hesitate to name anything which came his way: those were the days when taxonomists shot from the hip, and Rafinesque shot plants, animals, whatever fell into his hands.
Posted by McWort at 10:41 AM