More Moire (or is it moiré?) 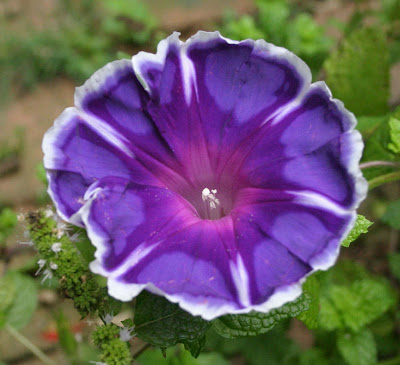 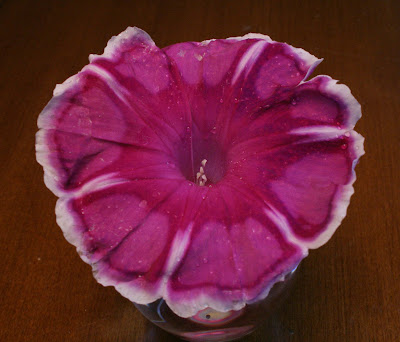 Wayne wrote to me asking if the colors in the images of the hybrid Japanese morning glories were accurate. I assured him that they were, and then went on to describe the watered-silk pattern of merging and blending colors seen in some of these amazing blossoms. As I was talking, I was about to use the word moiré, but realized that I wasn’t sure how to pronounce it. This is the word which precisely describes the watered-silk pattern.

Although the word came into English from French, evidently it is not a French word but rather Arabic (and some say ultimately from the Latin marmoreus, marble-like). And just as interesting, the word mohair apparently shares the same origin.

Believe it or not, the two images shown above are of the same blossom. The upper one was taken early in the morning, the lower one late in the afternoon on a rainy day. Evidently the blue pigments are not as stable as the red ones. The image of the blossom in its purple/blue phase was taken in natural light, the red phase was photographed under incandescent light with the camera light meter adjusted for that.

When the first flowers from this lot of seed began to bloom, I wasn't sure I liked them. But they have grown on me, and I can see them becoming favorites.
Posted by McWort at 6:51 PM