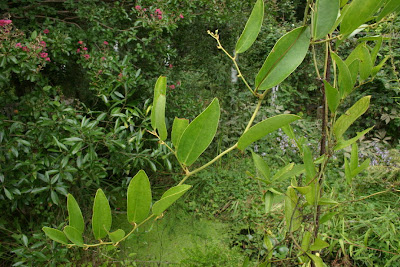 Some of the plants I'm most proud of are apt to engender perplexity in some garden visitors. The several members of the genus Smilax which grow here are good examples. These are tough plants, not easily removed when they get in the way of horticultural or agricultural activity. Some are herbaceous, but most are thorny, more or less evergreen vining plants. Even in those forms in which the foliage does not survive the winter, the stems remain green and conspicuous.

Several of them form nearly impenetrable thickets, and several are prodigious vines. Another of these robustly vining sorts, Smilax smallii, was discussed in an earlier entry: http://mcwort.blogspot.com/2008/02/smilax-smallii.html
The subject of this entry is the biggest of the North American species, Smilax laurifolia. It goes right to the tops of trees and forms thick, trunk-like stems, bare of foliage sometimes for the first thirty or so feet. It's a stunning plant, nothing like anything else in our native flora. Surely there must be at least one Victorian writer who deemed it antediluvian. To me it looks like something from a tropical rain forest.

Back in the early '90s Wayne and I were birding in far southern eastern Virginia shortly after a big storm had gone through the area. That storm was my friend: I had been trying to collect seed of this species for years, but the seed was always forty feet up in the trees. That day I was in luck: we found a big tree which had come down in the storm, and the tree was wreathed in Smilax laurifolia. And the Smilax was full of ripe fruit.

All the Smilax I've grown from seed have been very slow, and this species is no exception. Years after the seed was sown all I had to show for my efforts were tiny plants to be measured in inches. But they got better yearly, and three years ago they finally began to put on size. Now they put on about four feet yearly. The largest is being trained into position with the idea of letting it cover part of the deck railing.

This largest plant provided a surprise this year: it bloomed for the first time. It has yet to experience a really biting winter here. But in nature it ranges at least as far north as coastal New Jersey, so I'm expecting to do well in the long run.
Posted by McWort at 8:49 PM