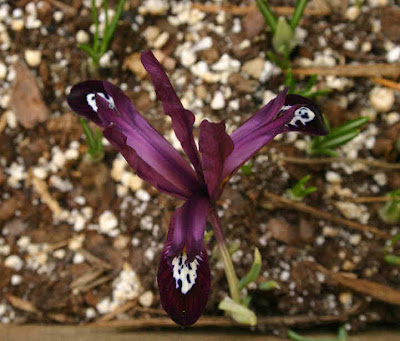 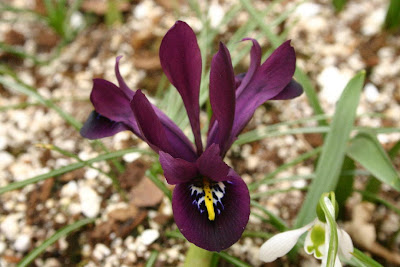 Forget the old line about March coming in as a lamb or a lion: this year it’s coming in as a polar bear. It’s mid-day now; we woke up to a light dusting of snow. This afternoon and evening we’re expected to get several inches. How many inches is that? To the east of us it might be as much as 10-12”; in the immediate area it will probably be about 4-5”.

Last week the first of the reticulate irises began to open, open slowly over a period of several days. Two are shown above: above is ‘Pauline’ and below one which came under a now obviously incorrect name. I don’t know what this one is - yet.

Hundreds of thousands of reticulate iris bulbs must be sold annually in this country, and I’ll bet most of them get planted out into the garden. There, they bloom well the first year, maybe even for a few years after that; but most gradually disappear or fail to bloom again even when they persist.

Certain cultivars persist indefinitely and bloom annually: the old original form of Iris reticulata has been blooming here for over forty years; ‘Pauline’ also seems to be very persistent. In general, if they don’t persist on their own and re-bloom annually, we assume they are not for us. In fact, with a bit of help a nice array of these can be enjoyed annually.

Part of the problem is that they are ridiculously inexpensive: that in itself removes much of the incentive to try and learn to grow them. The formula for these is the familiar one: a bit of lime and dry conditions after the foliage ripens.
Posted by McWort at 7:27 PM

I sure hope Pauline survives tonight's snow. She is quite beautiful!

She'll be fine, Lou. The reticulate irises shown are in a cold frame where they are safe from both weather events and nighttime nibblers.