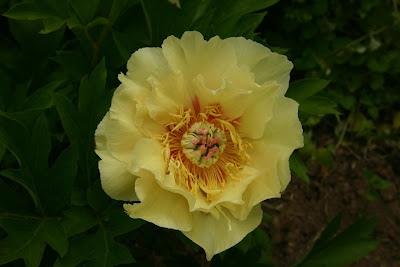 There is major excitement in the peony patch this week: for the first time one of the so-called Itoh intersectional hybrid peonies is about to bloom here. The cultivar in question is Don Hollingsworth’s ‘Garden Treasure’.

Yesterday the bud had progressed to the point where a bit of the yellow color showed. I could not help wondering what it must have been like for Hollingsworth those many years ago when he stood before the first plant of this cultivar as it was about to bloom for the first time and saw that first hint of yellow. Imagine the excitement he must have felt! That’s easy for me to do, because I felt a real rush when my own plant began to show its colors.

Several good yellow-flowered garden peonies are now within reach of those of us for whom the old expression “if you have to ask how much, you probably can’t afford it” has relevance. The week before last I saw nice gallon pots of several of these intersectional hybrids for $40 each. That’s hardly inexpensive, but compared to what they brought in the recent past, it’s within reach of just about anyone.

With respect to this yellow color, peonies are now where roses were a century ago. Although there were pale yellow hybrid garden roses throughout the nineteenth century (just as, if you count Paeonia mlokosewitschii, there were pale yellow peonies), it was not until the so-called Pernetiana roses appeared about a century ago that bright yellow roses began to become common in gardens. To this day, yellow roses have a certain cachet among rosarians, a certain apartness which roses of other colors do not share.

And there is another parallel: just as the longest-known yellow-flowered garden rose, Rosa hemisphaerica, played no part in the development of yellow-flowered garden roses, so Paeonia mlokosewitschii played no part in the development of these yellow-flowered intersectional peonies. These yellow-flowered intersectional peonies get their yellow color from one of the early French hybrids of the woody Paeonia lutea. I’ve read that the tree peony hybrid used by Itoh was the cultivar 'Alice Harding'. If that’s true, it’s a nice touch: Harding did much to promote peony culture during the early twentieth century. So much, in fact, that there is a herbaceous hybrid named 'Alice Harding' and a woody tree peony hybrid named 'Alice Harding'.
To some people, flowers are just flowers; to me, they are history books.
Posted by McWort at 8:35 PM