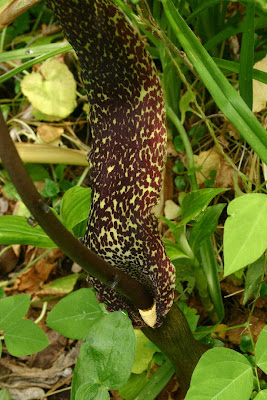 I spent the morning, an overcast morning which already had a hint of the heat predicted to come later today, out on the deck reading the paper and eating a bowl of corn flakes with strawberries and banana. When I got up at 6:30 A.M., it seemed cool. But after being outside for about a half hour, it was easy to sense the slowly rising temperature.

The south side of the house is covered with what are probably thousands of fragrant rose flowers. Nearby, Japanese honeysuckle and Goldflame honeysuckle are in full bloom. Peonies bloom here and there in the garden. I ate my cereal in a cloud of gentle floral fragrances, enjoying the cheery chirping of “our” sparrows.

I relaxed and opened my olfactory sensibilities to allow me to enjoy this to the fullest.

There I was, unsuspecting and vulnerable; and then it happened. At first I wasn’t sure – there was just a hint of something wrong. This is a holiday and there is no trash pick up today. But it wasn’t the garbage can at the other end of the deck that had interrupted my reverie. This was something initially more subtle but eventually unmistakable. The odor seemed to wrap around me, as if determined to disgust me.

I know that odor. It accompanies one of the uniquely repugnant floral displays of the year. It’s a combination of warm rat feces and rotten meat which quickly evokes revulsion in me and just as quickly attracts a swarm of expectant flies. A quick trip to the garden and a brief search in some likely places turned up the culprit: the voodoo lilies are blooming. These are not lilies in the botanical sense; they are aroids, jack-in-the-pulpit relatives. And what we call the bloom is not a flower: it's an entire inflorescence. The actual flowers are tiny things deep down within the sheathing spathe.

When I was a youngster they were often sold from crates in dime stores – just the thing to give a curious boy to get him interested in science, gardening or grossing-out the rest of the family. Back then we thought they were tropical; now we know that they make themselves at home in our gardens very well. The inflorescence is followed by very tropical (and very aroid) foliage.

In books this plant is variously called Sauromatum venosum, S. guttatum and also Typhonium combined with either of the two species names.

It sets seed here; the seed clusters are about the size and color of a ripe pomegranate.

The stench comes from the spadix: remove it and what's left can be enjoyed close-up. You're left with what might pass for a very oddly shaped and colored calla lily.
Posted by McWort at 9:39 AM