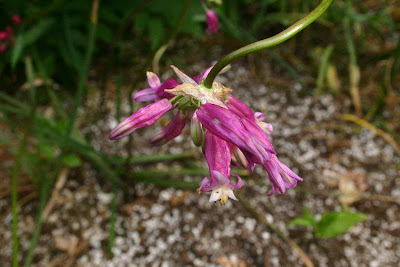 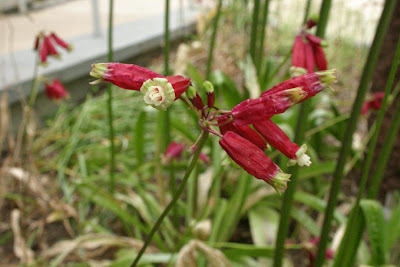 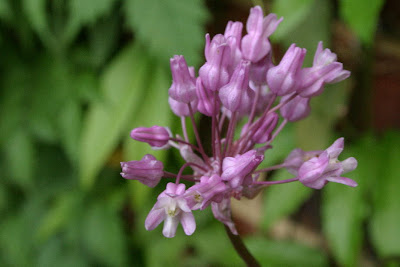 There is mention in Col. Grey’s Hardy Bulbs of a plant known to him as Brevoortia venusta. Grey notes that Carl Purdy (a once famous early twentieth century west coast collector and seller of native plants) suggested that this plant might be a hybrid of Brevoortia ida-maia (to use the name Grey used) and Brodiaea congesta (again using Grey’s names). Over the decades I remembered this name and the speculation about its parentage. All of these plants are currently placed in the genus Dichelostemma.
When Dichelostemma ‘Pink Diamond’ came on the market I made the connection: ‘Pink Diamond’ is evidently Brodiaea venusta. I don’t know if it is derived from wild collected material or if it is the result of a deliberate hybridization to test the hypothesis of the origin of what Grey called Brevoortia venusta.

Above you see ‘Pink Diamond’ at the top followed by the parent about which everyone seems to be in agreement: Dichelostemma ida-maia. Dichelostemma ida-maia (said to have been named for either, or both, the Ides of May when it was found in bloom or for one Ida May, daughter of the collector’s guide) in the past was sometimes called the Californian Floral Firecracker. The Dutch commercial stocks seem to be very vigorous and about thirty inches tall – good for cutting.
There is controversy about the other parent. The bottom image shows the one I vote for: Dichelostemma volubile. One of the oddest plants, the scape of the inflorescence twines around other objects like dodder or a morning glory. I’ve heard that ‘Pink Diamond’ has inherited some of this tendency, and that reinforces the hypothesis that D. volubile is the other parent of D. venustum.

These name changes illustrate some of the pitfalls awaiting the unwary. Brevoortia is feminine, so the name is written Brevoortia venusta. Dichelostemma, although it deceptively ends in an a, is neuter, so in that combination the name becomes Dichelostemma venustum.

I’ve heard that these plants sometimes survive our summers, but to be safe they should get a long dry period.
Posted by McWort at 8:45 PM