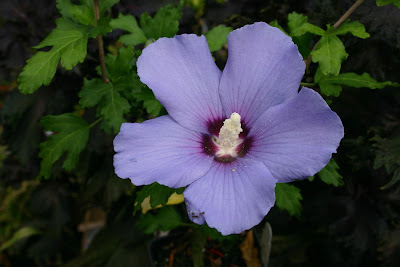 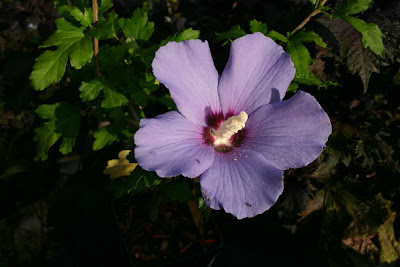 A plant of Hibiscus syriacus ‘Blue Satin’ was obtained earlier this year. I’ve had my eye on this cultivar for several years, and I’ve always hesitated. Why have I hesitated? Because Hibiscus syriacus cultivars, with the exception of some notable cultivars to be mentioned later, have the potential to infest your garden with hundreds of unwanted seedlings. This small shrub is one of the ultimate pass-along plants: so much so that there is inescapably something trashy and weedy about it. It’s often seen flourishing on abandoned inner-city lots and other waste places. It’s widely known as Rose of Sharon or called Althaea, a name sometimes used as the generic name of hollyhocks. They are both members of the mallow (hibiscus) family, Malvaceae.

These blue-flowered cultivars of Hibiscus syriacus (there is also ‘Blue Bird’) become a nuisance once they begin to bloom freely. One must either pick off the spent blooms frequently or be prepared to pull seedlings for years. But are there any other large-flowered, blue-flowered hardy shrubs for their season? I can’t think of any with large flowers. There are the various Buddleja, Vitex and Caryopteris, but all of those depend on flower clusters for effect: the individual flowers are tiny.

Individual blooms of ‘Blue Satin’ are about 3 or 4 inches in diameter. The color is hard to describe. Early in the morning, out of direct sun light, they seem blue, the sort of blue seen in some hardy Geranium. By noon, in bright sunlight the magenta tones are strengthened, and the color, to my eyes at least, is much less attractive. The same thing happens with the blue-flowered garden geraniums I know. Of the images shown above, the upper one was made before the sun struck the bloom, the lower one was made in full sunlight.

Something really exciting happened in the Rose-of-Sharon world in 1970: the United States National Arboretum named and introduced the beautiful triploid cultivar ‘Diana’. Not only was it beautiful, it rarely produces seed. No trash plant this, it’s a beautiful addition to our summer garden flora. The tantalizing excitement continued in 1980 when the Arboretum introduced three more of these triploid cultivars, ‘Aphrodite’, ‘Helene’ and ‘Minerva’.

Exciting as these cultivrs are, they are not the plant for which some of us were patiently waiting. The untimely death of Donald R. Egolf, who had guided the development of these cultivars, evidently brought an end to this line of breeding. What we are still waiting for, of course, is a triploid, seed-free, blue-flowered Hibiscus syriacus.