Lycoris squamigera is a tough one! 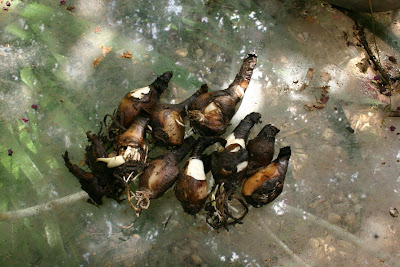 When I left the garden shown in the Lycoris squamigera in a country garden series, I was carrying a bag of Lycoris squamigera bulbs. My hostess offered them to me with the comment that they had been dug earlier in the spring. As she returned from the house with the bulbs, my expectations rose because she had a plastic grocery bag with what seemed to be a muskmelon-sized lump. As soon as she handed the bag to me, my hopes were dashed: the bag weighed about as much as a peanut and, as a discrete squeeze revealed, seemed to contain only chaff.
When I got to the car, I took a closer look. Yes, the bulbs were extremely desiccated; but they seemed to have a solid core. Maybe a bit of life lurked in some of them.
I soaked them at the first chance, and something amazing happened. Within a few hours those bulbs went from featherweight ghosts to heavy, plump, seemingly normal bulbs. I was amazed, although I should not have been. I’ve known Nerine to do the same thing: shrink down from a two inch diameter bulb to a pencil-thin core during the dry season and then miraculously plump up with the first good soaking.
Those Lycoris squamigera bulbs are not wasting any time: they are already sprouting new roots!
Posted by McWort at 12:08 PM