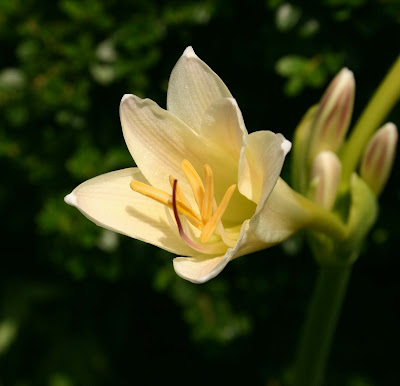 The genus Lycoris has had an interesting history in our gardens. Some, such as Lycoris squamigera and L. sanguinea, were well known in New England gardens a century ago. Others, such as L. radiata, became naturalized in the Gulf states. L. squamigera became the common Lycoris of the North and L. radiata became the common species in the South. Other species were imported occasionally, but the stocks were typically mixed, there were the usual problems with accurate nomenclature, and commercial nurserymen here in the US did not take them up enthusiastically. Nor, it seems, did the gardening public. Was there ever a "Lycoris Society" ? I don't think so. One Sam Caldwell made a stir about forty years ago by showing a nice range of hybrids. Few people back then had ever seen a Lycoris seed, much less a home grown hybrid. Nothing permanent seems to have come from Caldwell's work.
Now there are probably more varied Lycoris available than at any time in the past. Hardy yellow-flowered Lycoris, long a holy grail of Lycoris enthusiasts, are now readily available. More to the point, there are now several Lycoris forms readily available which set viable seed: these promise an even brighter future for these plants in our gardens.
The plant shown here, Lycoris longituba, is a relatively new arrival in my garden. These were obtained in 2007 and are blooming here for the first time this year. This Lycoris longituba is said to be a good species, good in the sense that it sets viable seed which, if grown on, produce more Lycoris longituba. But from what I've read, the cultivated stocks seem to be variable.
The catalog description led me to expect white-flowered plants. Indeed, from a distance they do look white. But close up it becomes apparent that the color is more complex: the white is suffused with orange and yellow, giving an orange-juice-in-milk effect. It's very beautiful.
The fragrance of this one is pleasant, a quality it does not share with all of its relatives. The plant we call Lycoris squamigera, for instance, has a scent which to me is the scent of vinyl.

For the future: there are at least two different (purportedly) yellow-flowered species growing here: I'll show those when and if they bloom.

What triggers bloom in Lycoris? So far, it seems to be an unsolved mystery.
Posted by McWort at 9:59 AM