Baby, it's cold outside! 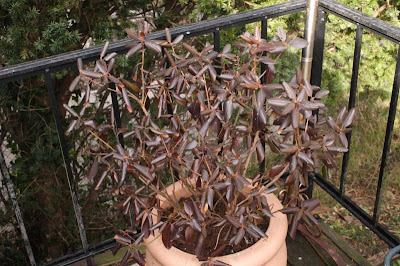 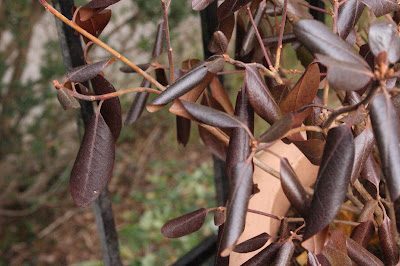 This is Rhododendron 'PJM Elite'. When I saw it early this morning it was in full curled-leaf mode: it looked as if the leaves had all been transformed into little brown cigarettes. By the time I got around to taking these photos at about noon, the leaves had already uncurled a lot. It's thought that this leaf curling is an adaptation to prevent desiccation during below freezing conditions.
I've never seen this plant used as a hedge (I've been thinking about it here) but it would be easy to see through a hedge in full leaf curl mode. Most of us wouldn't want the neighbors to catch us sun bathing nude in 20 degree F weather, would we?

Or would we? It's all relative: years ago Wayne and I used to bird regularly during the winter. Several ocean-side sites were often our goal, and  on more than one occasion, as we stood on the windy beaches shivering under multiple layers of coats, scarves, hats and gloves, we spotted some rare birds indeed. They're a shy, quiet species which typically lands on some far, remote end of the beach. Their  bright pink color makes them very conspicuous from a distance.  "No", I thought to myself the first time I saw them, "it couldn't be, could it?..." But our eyes were not deceiving us: there they were,  Canadians from the frozen prairies far to the north,  all but naked in the frigid air, sunning themselves under conditions which perhaps suggested spring back home to them.  Brave souls indeed: all I could think of was getting to someplace out of the wind and settling down to hot lunch.