Is this the Red Line fern? 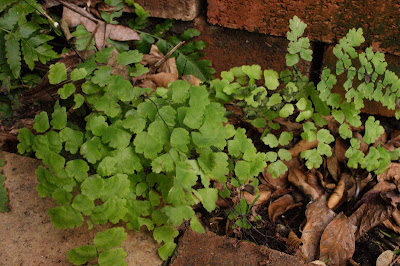 The local branch of the Washington, D.C. subway system is the Red Line. Who would have thought that attentive riders of this line can do some botanizing deep below the streets of the city above? Yet there they are:  as the trains approach certain underground stops such as Woodley the lights beside and underneath the tracks illuminate a fringe of green in the glow of the lights. That fringe of green is a fern,  a fern of the genus Adiantum. I don't know which species it is, but if it's a native fern,  the one shown above, Adiantum capillus-veneris, is a likely candidate. This species grows in many countries around the Mediterranean and from northern South America well up into North America. On the Atlantic coast it gets at least as far north as Virginia.

On the other hand, there are several tropical species of this genus which are commonly sold as house plants, and over the years many of these have probably been brought into the subway system by shoppers. Perhaps spores from one of these got things going.

Whatever they are, it's a surprise to see them deep in the subway system. They are abundant and easily spotted at several stops. Are they confined to the Red Line? I don't know; perhaps someone reading this will comment.
Posted by McWort at 1:05 PM