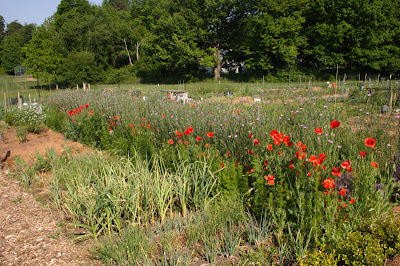 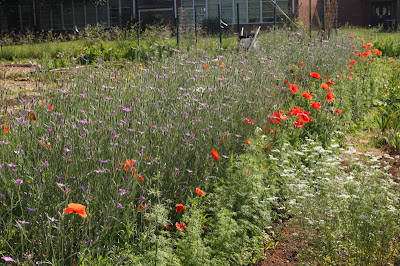 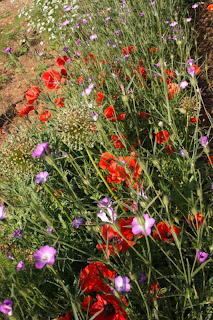 Agrostemma githago has been blooming freely for about a week, and the other day it was joined by poppies, poppies in numbers. These are corn poppies, Papaver rhoeas.They are gorgeous, exciting and so easy to grow. Like them? Make a note to yourself to buy the seeds in September and to sow them once you have cleared a space for them in the autumn garden.
Don't make the mistake of waiting for spring to sow the seeds. By then the plants should be several months old, not just starting out.
It took three things to make this display happen. Two were of the nature of inspiration from gardeners of the past. If you love poppies be sure to read, and read again and again,  Celia Thaxter's An Island Garden.(1894, Houghton Mifflin, available in an excellent paperback reissue of 1988).
Another old book provided another: J. Horace McFarland's My Growing Garden (1915, Macmillan). Color plate xviii shows an eighty foot border planted to mixed Shirley poppies with the caption "An ounce of Shirley poppy seed... sowed along an eighty-foot border... in mid-June came days of poppy glory." Here's a scan of that plate: 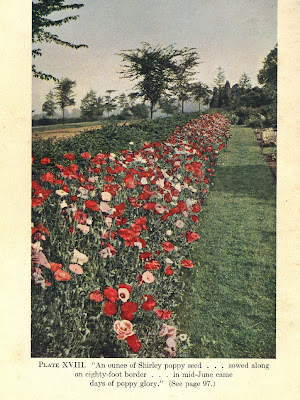 The planting in the images from my community plot is of two parallel forty foot borders: so my eighty foot poppy border has two mirror image sides.﻿
And then there is the third thing: a source of quality, inexpensive poppy seed. Such a thing does exist: check out Wildseed Farms in Fredericksburg, Texas. McFarland's ounce will set you back all of $4.60 the last time I checked. Try to think of some other purchase of that amount which gives even remotely so much delight.
Posted by McWort at 5:39 PM