Flowers of the corn fields 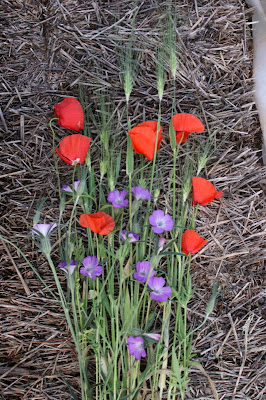 Back in the mid 1970s a series of compact, information filled and very well illustrated little books came out of the Netherlands to be published in this country by Collier. They were authored by Rob Herwig. I have the ones treating bulbs, house plants and varied garden plants. The one treating varied garden plants was illustrated by Herwig and Wolfram Stehling. You can easily see the seeds of the so-called New American Garden in these books, and it's hard to avoid the point of view that the New American Garden was in fact America's belated adoption of pre-World War II north European gardening sensibilities.

When they were new, I pored over these little books and their illustrations, and even now, decades later, I still occasionally consult them.

The image above was inspired by a comment in Herwig's 128 Garden Plants You Can Grow. Writing about corn poppies and bachelor's buttons, he wrote "It is very effective to grow some wheat or barley with these flowers, reminding one of old-fashioned wheat fields." I've been waiting decades to make this image!

The plants shown are corn poppies, Papaver rhoeas; corn cockle, Agrostemma githago, and what might be wheat. The corn poppies and corn cockle are from my community garden plots; the grass is that sold as "cat grass", grass intended for consumption by domestic cats. Keep in mind that the word "corn" in these names does not refer to what we call corn here in America, but rather refers to grains in general.
Posted by McWort at 7:49 PM