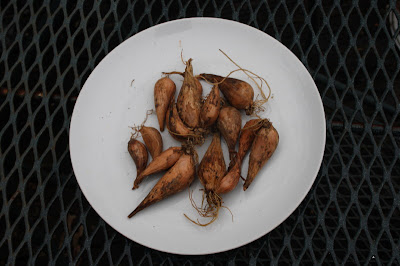 This is the French gray shallot which, as it turns out, is botanically distinct from the shallots of grocery stores ( or at least the grocery stores where I shop). The grocery store shallot is botanically a form of the culinary onion, Allium cepa. The French gray shallot is a distinct species, Allium oschaninii. There is a school of thought which claims that the French gray is the true shallot, and while that point of view might have merit, for practical purposes it's about as significant as the distinction sometimes made between cassia (what most of us  - "us" in this case being most of us Americans - know as cinnamon) and "true" or Ceylon cinnamon. Cassia and Ceylon cinnamon are distinct in taste, and shallots of the onion sort and French gray shallots are distinct in taste. All have their uses.

As far as I know, both culinary onions and garlic are known only as cultivated plants; culinary onions are grown from seed, but garlic apparently is not known to produce seed. My French gray shallots have not bloomed here, and I don't know if they produce viable seed or not.
Posted by McWort at 12:09 PM