'Mrs. Aaron Ward': A rose and her eponym

I have a small rooted cutting of the early twentieth century rose 'Mrs. Aaron Ward' coming along in the garden now. My plant is of the climbing form discovered in the early Twenties; the original bush form was introduced in 1906-7.  It has not yet bloomed here. I've assembled an interesting collection of older roses, and now I'm busy keeping my nose buried in old books to track down more information about them.

Earlier this year a newspaper article on the release to the public of a treasure trove of digitized versions of old lantern slides prepared from photographs of Frances Benjamin Johnston got my attention. At the time I went to the website for these and took a look:  there are thousands of slides to be seen.  For a Christmas present this year Wayne gave me a copy of the newly published volume by Sam Watters on the life and work of early twentieth century photographer Frances Benjamin Johnston, Gardens for a Beautiful America 1895-1935,  Acanthus Press, New York, 2012. This is illustrated with a selection of lantern slides from the Library of Congress collection here:

I've just started with this one, but no sooner had I skimmed the contents than I hit pay dirt: there is a photo there captioned "Rear Admiral Aaron and Elizabeth Cairns Ward, circa 1914" .  On the opposite page is another photo captioned "Willomere, Real Admiral Aaron Ward House, Roslyn Harbor, New York. Rose Garden, circa 1914". I'll stick my neck out and say that the rose garden photo shows an extensive planting of  the rose 'Mrs. Aaron Ward'. The height and the color look right: this is known to be a very variable rose in terms of color, and the colors shown in the image seem right on to me.

Keep in mind that these are not the sort of color slide transparencies we were used to until the arrival of digital photography. They are in fact an example of an amazing hybrid technology in use at the time: the monochrome slide original was painstakingly hand tinted resulting in something which is neither simply a photograph nor a painting.  The photographer generally gets the credit for these images, yet the person who did the tinting was at least an equal partner. The colorist for Johnston's slides was one Grace Smith Anderson  according to Watters' text. These tinted slides can produce magical effects, effects unique to the process used to make them. No modern color photograph is apt to approach the moodily atmospheric effects seen in these slides.

And here are two of the Ward images from the Library of Congress collection (both of these are included in Gardens for a Beautiful America 1895-1935): 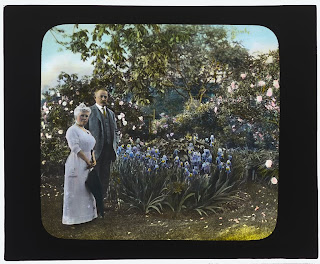 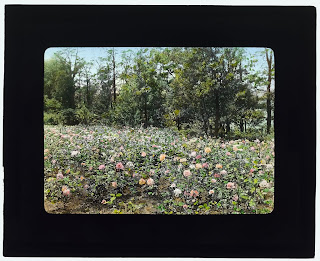 Next June look for an image of the rose!

Jim, you have just TOTALLY made my day!! You already know how much of a history addict I am, and photos by FBJ are such a time capsule of her age! She did some wonderful images of Fredericksburg, including the garden at Chathamm, IIRC. Now I'm off to follow your link and waste some more time.

(Looking forward to status updates on your rose, too)

Connie, you won't be disappointed: there are plenty of images of Chatham.
Get yourself a copy of Watters' book: it's hard to curl up in bed with a computer monitor!
I'm glad you liked this post: now you have an idea of how I felt when I unwrapped the book: wonderful stuff here.