Passiflora incarnata How to eat maypops 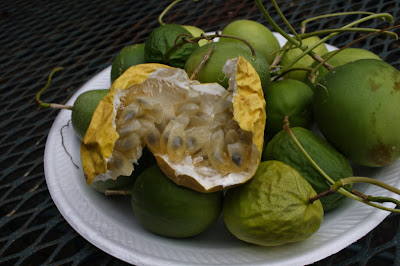 Passiflora incarnata was the subject of the second post to this blog back in July 2007. It's been in the garden for decades, and now ramps freely on the front of the house and over all nearby shrubbery. It flowers and fruits freely. The first few times it fruited I tried the fruit and was not favorably impressed: there was a bit of something sweet and citrusy, but little more. I wrote them off long ago, and began to wonder why any one would make a fuss about them.

Yesterday some nurses came by to help with mom. As one of them approached the house, she spotted one of the maypos on its vine. In a richly modulated tone of voice which expressed surprise, indignation, disbelief, delight and who knows what else, she rhetorically asked (it was obvious that she knew the answer) "what are these?" And before I could articulate my reply she pounced on one, ripped it open, and began a sonata of gustatory pleasure sounds. Then came questions as numerous as the seeds in the maypop.

I told her what she already knew: that they were passion fruit. I began to ask her how she knew about them: was she from one of the Caribbean islands or somewhere in South America (no, she was from Zimbabwe!). It was hard to keep her attention because the whole time we talked she eagerly scanned the tangle of vines for more fruit - and as soon as she found some, promptly consumed it. In a movement which suggested plenty of practice, she broke open each fruit and exposed the cluster of seeds, each seed  in its individual juicy capsule. I noticed that these clusters were darker than the ones I had sampled.  So I tried one too: it was much, much better than the ones I had tasted earlier in the season. They were definitely juicier, and they had a rich fragrance and flavor the ones I had tried did not have.

So I not only learned how (and when) to eat maypops yesterday, I learned that they are well worth eating! In the image above you see a very ripe one: the aroma was enticing once the fruit was broken open.  The juice is not plentiful, but there is enough to make them worth trying. The flavor has a quality which suggests grapefruit to me, but grapefruit mixed with something else a bit musty. This quality is also present in the ripe fruits of mayapple, Podophyllum peltatum.