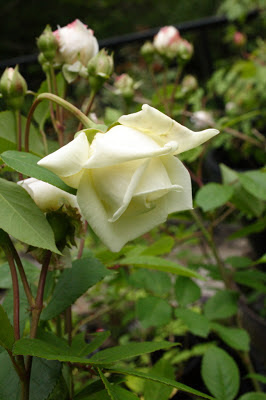 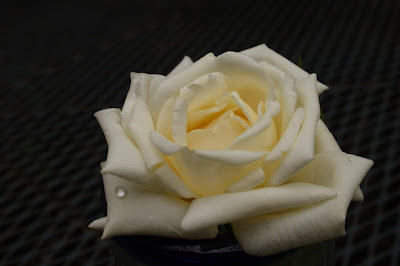 In its day (it was introduced in 1891 by German rose breeder Peter Lambert) this rose was one of the most famous, widely grown and esteemed roses in the world. In the English-speaking world it was "KAV" to many, some of whom no doubt also eventually grew "K. of K." ('Kitchener of Khartoum'). But K. of K. wasn't introduced until 1917, and by then sentiment for things German had shifted in the English-speaking world, hadn't they?

For a full decade the Kaiserin did not have a rival. But in 1901 that same  Peter Lambert introduced 'Frau Karl Druschki', another white-flowered rose of undoubted garden worth. Beautiful as she is, the Kaiserin prefers to be pampered, and the rumor is that she is not really hardy enough for garden use in really cold climates. Frau Karl is not only hardy, but she is also vigorous.

The two roses make an interesting contrast: the Kaiserin is a rose in the style of the old tea roses: not too hardy, with sweetly scented, nodding flowers, white with a warm suffusion of yellow in the center. The Frau on the other hand is hardy, not scented, with flowers borne rigidly upright, and of a cold, brilliant white (although she is known to blush very slightly pink in some weather).

My preference is for white flowers with a slight wash of warm yellow.