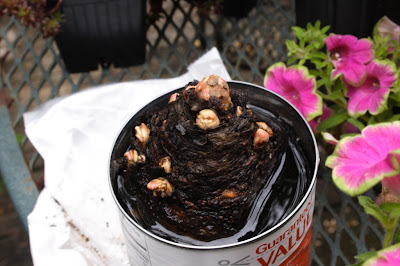 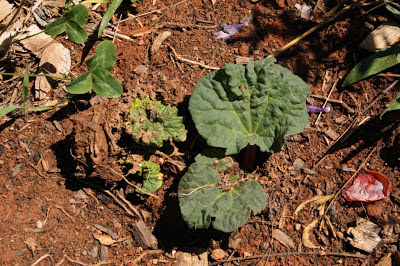 Last year I bought two rhubarb plants for my little garden up on the hill (my community garden plots). I didn’t plant them in time and they rotted in their bags. By the time I thought about replacing them this year, it was already well into May. In a moment of weakness I ordered a replacement plant offered in an end-of-season clearance sale. Why did I do that? The plant was sent promptly, but it was nothing like what I expected. It was a brick-sized block of crown: the sides were flat as a sheet of paper and the corner angles were right angles.  Other than the fact that one end of the brick had scattered bumps which, with some imagination, might be construed as dormant buds for vegetative growth, it looked like a block of dressed wood.


I had no idea what to do with this thing. There was not a root in sight. I decided to soak it overnight. The next morning the seemingly dormant buds had indeed started to swell. That's what you see in the upper image.  So the brick was alive after all.  It was planted into the ground later that day, and I’ve got to say I was mightily surprised when within a week I noticed that the brick has put up small leaves. That’s one tough plant!
Posted by McWort at 9:44 PM