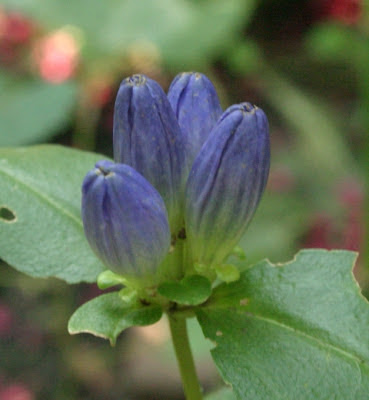 For local gardeners, the genus Gentiana divides neatly into two groups: the ones we want and can't grow and all the rest. OK, it's not really as grim as that; among the ones we want to grow there are several which do well here in the greater Washington, D.C. area. The one in this group which I would recommend in particular is Gentiana scabra. If that one does not satisfy your gentian cravings, you might want to give consideration to the possibility that there are other things going on in your life which need attention.

Firmly lodged in the "all the rest" category are the bottle gentians. We would probably appreciate these much more if some of their overweeningly beautiful relatives did not exist. But the bottle gentians are like those people who exist in the shadow of a deservedly celebrated sibling: the best they can hope for is a bit of reflected glow.

I would not want to be without the bottle gentians. For one thing, they have taken care of themselves in my bog trays for years. The earliest ones are blooming now; there are others which do not bloom until late October or early November. The soft blue, curiously shaped flowers are always a pleasure in the late garden. I've never noticed a fragrance, but the local bumble bees seem to be obsessed with the flowers.

Most gentians have an elegance of bearing and form which is characteristic of the group. The bottle gentians share this: long before the flowers show color, the developing buds are very interesting. Years ago, I had a pot surfaced with one of the local mosses. In the pot grew some bottle gentians and the little Japanese orchid called egret flower (Pecteilis/Habenaria/Platanthera). The orchid and the bottle gentians didn't bloom together, but for months that little pot was the source of keen interest and pleasure.
Posted by McWort at 3:05 PM