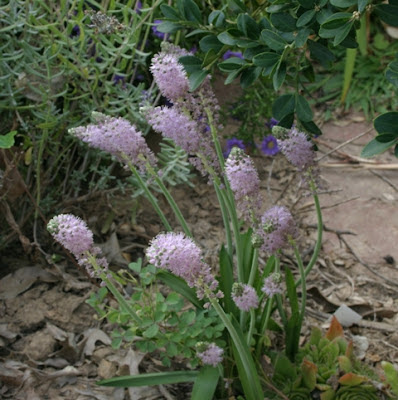 The plant in the image above is Barnardia, long a resident of our gardens and for just about as long neglected. This name Barnardia is new to most of us; recently the genus Scilla has been re-worked and the old familiar names seem likely to be replaced by new ones such as Barnardia. Generations of gardeners have called this plant Scilla chinensis, S. japonica or S. scilloides (silly scilla?). This is another of those plants which, although generally described as autumn-flowering, in fact flowers during the last weeks of summer. It blooms with some of the Liriope and Ophiopogon, and in some ways it resembles those plants. It certainly doesn't look anything like the usual late-winter, early-spring flowering Scilla of our gardens. As you can see, the flower color is not at all assertive; it takes a big group of these in flower to make much of a showing. The color of the flowers reminds me of that of two other flowers: Cotinus and Muscari comosum 'Plumosum'.

The plants in the image were grown from seed; I simply scattered the seed on the ground, stepped back, and two years later the plants were large enough to bloom. Now that I've grown this plant for several years, I'm beginning to suspect that it has some potential which has largely been ignored. Isolated plants definitely fall into the "curiosity" category: they are not at all showy. But in a large group, this plant has potential. Now that I think about it, it would make a good border for an extensive planting of Begonia grandis. Another nice association is that with Iris dichotoma, although the iris is apt to reach its peak before the Barnardia starts. The earlier colchicums bloom at about the same time and mix nicely.

The Barnardia puts up foliage in the autumn, but this foliage does not persist through the winter.

Although the individual flowers of the Barnardia might remind some of those of Liriope or Ophiopogon, the seed capsules and seeds will not.
Posted by McWort at 12:27 PM