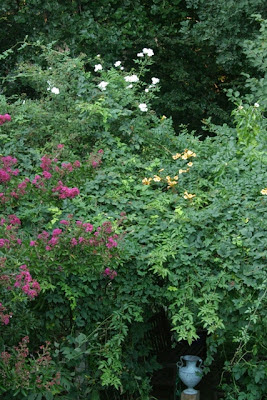 The patch of white at the top of this image is a group of flowers of the rose 'Darlow's Enigma'. Some of you are perhaps thinking to yourselves as you view this "I can't see the roses". That's partly because the roses are not meant to be seen. 'Darlow's Enigma' is nothing to look at; it's grown for it fragrance and long season of bloom. And its fragrance is one of those rose scents which is very free on the air. When I selected roses for the pergola, freedom of fragrance was the main consideration.

I don't know who Darlow is or was, but I can partially explain the enigma. There has long been controversy among rosarians about the identity of the so-called musk rose. At the end of the nineteenth century, there still existed a rose which had been grown in British gardens for a long time, perhaps centuries, and was known as musk rose. Under British conditions, this rose began to bloom late in the season, sometimes not until August. One of the puzzles of modern horticulture is whether this plant still exists. There is a plant making the rounds which seems to fit the old descriptions; evidently it is not reliably hardy here in the greater Washington, D.C. area. This is one of the parents of the Noisette roses.

My guess is that 'Darlow's Enigma' was a candidate at one time for consideration as the true musk rose. Do any of you know the whole story?

Several years ago, an internet friend, Joe, was in the area and came by to see the garden. As we took the tour, I was pointing out things here and there; as we passed under the pergola, Joe offhandedly said "Oh, I see you have 'Darlow's Enigma'!" I was dumbfounded. First of all, as roses go, 'Darlow's Enigma' is rather nondescript. I would be reluctant to identify it in another garden. For another, I doubt that many people grow it. How in the world did he even know about it? It turns out that in an earlier incarnation he had managed an antique rose collection.

The chrome-yellow flowers in this image are one of the "yellow" forms of Campsis radicans. Catalogs often illustrate a bright lemon yellow campsis, and if such a thing exists, I would very much like to have it. The color of this chrome-yellow form is a disappointment to me.