the glorie of all these kindes 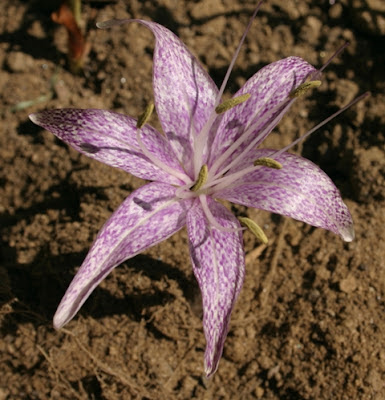 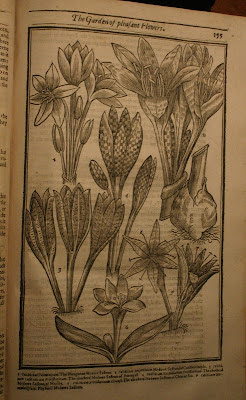 The plant in the image above is Colchicum variegatum. This is almost certainly the same plant described in the early seventeenth century by John Parkinson in his Paradisus as "The checkered Medowe Saffron of Chio or Sio". His description of this plant contains a passage which is one of the more often quoted passages from the Paradisus: " it flowreth later for the most part then any of the other, even not until November, and is very hard to be preserved with us, in that for the most part the roote waxeth lesse and lesse every yeare, our cold Country being so contrary unto his naturall, that it will scarce shew his flower; yet when it flowreth any thing early, that it may have any confort of a warme Sunne, it is the glorie of all these kindes."

This species flowered here for the first time about seven years ago. That corm had come from an English source (although doubtless Dutch grown); it was small when received, and it took a year or two of TLC to bring it up to blooming size. The year after it bloomed it rotted during the summer. That plant had a much smaller flower than the one shown above but was otherwise similar.

I got a second chance last year with a corm imported from Janis Ruksans. This one too was small and did not bloom but it did grow well. During the summer I was careful to keep it dry. When checked for the penultimate time in mid August, it seemed fine. When checked again a week ago, I was crushed: the corm had shrivelled badly, leaving only a small bit of living tissue. That living scrap is now in the refrigerator in a zip-lock bag. It seems to be recuperating.

The flower shown above came as a corm in mid-August from JMcG, my source of choice for intriguing bulbs. This one has a flower about three inches in diameter - more if it's flattened out - and is everything I've been hoping for from this species. It is indeed "the glorie of all these kindes."
Posted by McWort at 5:35 PM

You do not have an original edition!?

(By the way, a little googling led me to the Times review of the 1905 facsimile).