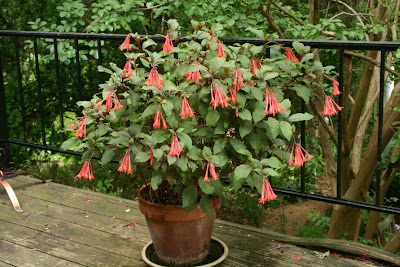 The hummingbirds and I both like this plant a lot.

As a group, fuchsias are little grown in our local gardens. One sees them in numbers around Mother’s Day: the local nurseries sell loads of them. About a month and a half later one sees those same plants dangling from some porch rafter in a hanging basket, hanging on not only to the rafter but to dear life, mostly defoliated, partially dried up, a pathetic sight ready for the trash bin. Evidently there are cultivars which can be successfully grown here, but they don’t seem to be catching on with local gardeners.

One which does very well here is shown above. This is 'Gartenmeister Bonstedt', an old hybrid of Fuchsia triphylla. It has the potential to bloom year round: the plant in the image above has done just that. The blooming period typically begins here sometime in June as the newest growth begins to produce flower buds. Bloom continues steadily right into the new year (it comes inside sometime in November; indoor life slows it down but the blooms keep coming). In most years it will take a break from February to May or so, but last year it bloomed throughout the winter and early spring, too.

The genus Fuchsia is named for Leonhard Fuchs, a sixteenth century German botanist. The plant was not known to Fuchs; it was discovered about a century and a half after his death. The typical American pronunciation is FEW-sha; Herr Fuchs would be better remembered if we were to pronounce it FOOKS-e-a. If you know how to do the glottal ch, so much the better.
Posted by McWort at 5:36 PM