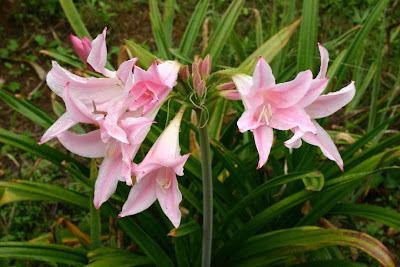 The plant shown in the image above is one of the hybrids known as ×Amarcrinum. The little times sign indicates that it is of hybrid origin; the name itself is derived from the names of the its parents, Amaryllis belladonna and Crinum moorei. This hybrid has been produced at least twice, and it is sometimes called ×Crinodonna.

Amaryllis belladonna itself does not seem to settle down in our gardens to become a good garden plant. Numerous Crinum grow well here, but their foliage is hugely out of proportion to their flowers - and none of the Crinum I've grown as garden plants could be called free blooming.

×Amarcrinum combines the fragrance, late season and manageable size of the Amaryllis belladonna parent with the ease of culture of the Crinum parent. For small local gardens it's a better choice than either parent. The foliage goes down during the winter and the plants make strong growth during our summers.

For more views of these plants, which I photographed today in a local garden, see here:

Email ThisBlogThis!Share to TwitterShare to FacebookShare to Pinterest
Labels: ×Amarcrinum

Well I'm rather impressed. I agree it's a better grower than Amaryllis belladonna but I've nevertheless found it to be temperamental in the mid-Atlantic.

Fin, where do you garden?