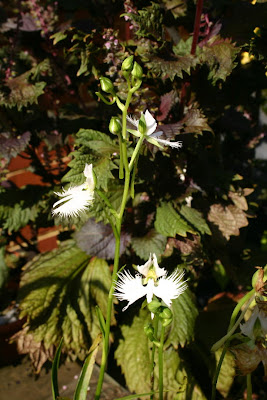 What should we be calling this plant? It's been placed in the genera Habenaria, Platanthera and Pecteilis. Each of those names still seems to be in use for other orchids, and that suggests that there is someone out there who considers them to be good genera.

One of my email correspondents says he has hybridized Habenaria radiata and Platanthera blephariglottis. I hope some idiot does not announce this as a "bi-generic hybrid" instead of doing the more reasonable thing - acknowledging that two plants which hybridize to produce viable offspring do not belong in different genera. In fact, some might say that in spite of whatever morphological differences exist between them, the ability to "hybridize" and produce viable offspring is a good sign that they are in fact the same species.
Posted by McWort at 4:45 PM