More food for a hungry man 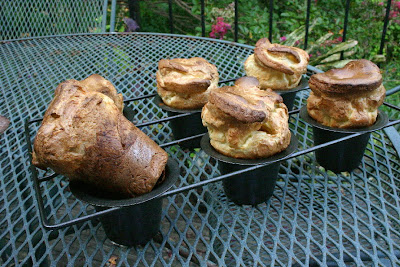 I prepare all of my own meals when I'm at home. I almost never eat out. I enjoy cooking, too, but sometimes it presents a dilemma: cooking takes time, and sometimes it's time better spent doing something else. And so the question often arises: what can I fix for dinner which is tasty but which won't keep me in the kitchen for hours?
You see one answer to that question above: popovers. It takes about ten minutes to whip up a batch of popover batter. One then simply pours it into the pans, puts it in the oven, and then comes back about an hour later to enjoy the result.
Popovers are one of those foods which can with equal success be treated as a savory or a sweet food. The batch above was made with a bit of blue cheese, an addition which nicely spiked the flavor profile. Mom and I ate the first ones slathered with butter; the remainder were eaten with orange marmalade.
Posted by McWort at 8:24 AM

Email ThisBlogThis!Share to TwitterShare to FacebookShare to Pinterest
Labels: popovers