Jim to the rescue... 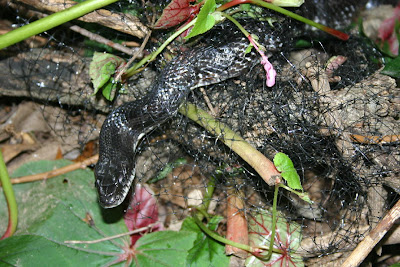 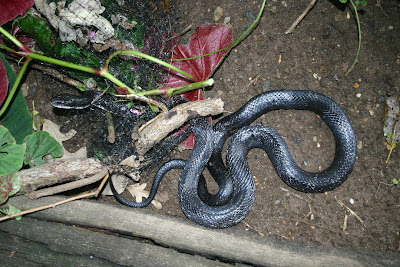 While out in the back garden today I looked down and saw something neat: a huge black rat snake, Elaphe obsoleta (aka Pantherophis obsoletus) . It surprised me by not making any attempt to get away (they often do that - as snakes go, they have a very laid-back disposition). Then I saw why: it had crawled into some of that bird netting I use to protect plants from deer and was trapped in it.

I carefully lifted the snake and netting from the ground; then I could see that it was really seriously entangled. The netting had cut into its skin in several places.

I put it down and went into the house to get some scissors. Then I very carefully began to cut the snake out of the netting. About eight inches of the front end of the snake (the business end!) were free, and although it maintained a striking pose through most of the ordeal as I cut, it never bit me. There were times when I felt as if I were doing surgery.

When I finally got the snake free, I took it in to show Mema. Then I got her to take my picture with the snake. Unfortunately she had trouble pointing the camera (at one point she was pointing it at a tree and kept saying "I can't see you"). The picture with me isn't great because it does not show the length of the snake - easily five feet. And it was a fat heavy one.

After all of this I returned the snake to the back garden. I put it on a vine, and it made a nice pose. I ran back in to get my camera, but in the meantime the snake had disappeared.
Posted by McWort at 8:38 PM

WOWWW.... I would be afraid of that big guy!! My cats keep the mice and voles away so I dont see to many snakes!! :) Missed your last couple of posts those popovers look amazing!! and the dahlia such a clear beautiful red!!

Oh YAY! I sadly found 2 snakes dead after getting tangled in that sort of netting before I got rid of it.

BTW, I searched for local gardening blogs and found you. I'm in Laurel.

Glad you found me.

It's ironic: I bought that netting originally to prevent birds from flying into our glass doors. It works beautifully for that purpose.
But I now know that I can't leave that stuff lying around on the ground: it's a trap for some other animals.