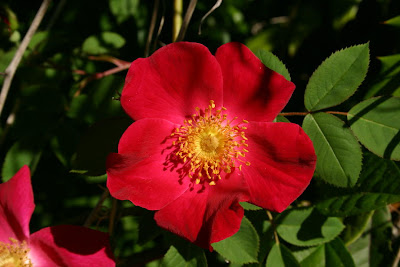 Every rose in this garden is a favorite. Why should it be otherwise in such a small garden? There isn’t room enough here for all the roses I want, so what sense would it make to have any but favorites?

‘Scharlachglut’ has been in the garden longer than any other rose – so long that I forget where it was obtained. That information is probably buried in the manuscript gardening diaries I’ve been keeping for forty years. Over the years it’s been moved several times.

The parentage of this rose is given variously; evidently it’s a hybrid between a modern rose and one of the old European garden roses. It forms a shrub about six feet or more high where there is room for it. Here, it gets cut back enough to fit into a smaller space. It blooms only in the spring, and then for about two weeks or so. Many people who are drawn to this rose because of its intense color – and “drawn” to it is an appropriate way to phrase it because the strong fragrance of this rose carries well on the air – lose interest as soon as they hear it blooms only in the spring. Yet these same people plant other herbaceous and woody plants which bloom only once a year; why are the roses held to a different standard? Learn to think of them as you would an azalea or a peony; enjoy them in their season and then go on to other things.

This rose is sometimes compared to or confused with the rose ‘Altissimo’. ‘Altissimo’ is one of those roses which looks great in catalogs. When you get it in the garden you notice that its red is a very cold red and there is no fragrance to speak of. ‘Scharlachglut’ on the other hand has the most wonderful warm red color when the flowers first open; they later fade a bit, especially if the weather is hot, and the old flowers do “blue” a bit. But in a cool spring a bush in full bloom is a glorious sight.
Posted by McWort at 8:14 PM

Well argued Jim! I have also wondered about that double standard. We both lived through the "4-season" plant era and I think that, while more seasons of interest are a good thing, in general that attitude excludes most of my favorite plants. Complexity is a wonderful element that accrues in mature well managed gardens. Any attitude that limit the dimensionality and depth of a garden is a bad thing.