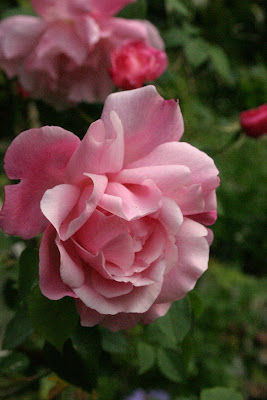 Writing in the early 1930’s on the occasion of the death of a twelve-year-old plant of the rose ‘Alida Lovett’, Richardson Wright had this to say in his Another Gardener’s Bed Book: “Ah well. I could buy another. Or perhaps it would be better not to try Alida again. A wise man never attempts to attain the same perfect enjoyment twice in the same place…It might be better to substitute for Alida some Spanish upstart with an unpronounceable name.”

The rose ‘Alida Lovett’ is all but forgotten now, although it is still in commerce thanks to the efforts of certain old-rose enthusiasts. One of them is sending me a plant very soon (that’s still true, isn’t it, Connie?).

But this post is about the Spanish upstart. It’s not hard to guess which rose Wright had in mind. Almost certainly it had to be ‘Mme Grégoire Staechelin’, the beauty you see above. She made her debut in 1927 to great acclaim (and back in those days she was called a climbing hybrid tea). The rose world embraced her enthusiastically, and to this day she still has a keen following wherever fine roses are grown.

She has at least three qualities which people of orthodox taste do not like. For one, this rose blooms only in the spring. For another, the flowers nod charmingly in the style of tea roses. And then there is the name: the ethnocentric spirit of early twentieth century America rejected the name 'Mme Grégoire Staechelin' and substituted "Spanish Beauty".

In the modern scheme of things, she is now placed among the large flowered climbers.

The buxom flowers have a great scent and a color combination which almost everyone likes. A well-established plant in full bloom is very easy indeed to look at, and it will scent the surrounding garden.

About this word buxom: after typing buxom, I was curious to see how it would be defined by the Encarta Dictionary which is available when I use Microsoft Word. There it was grossly defined as “with large breasts”. I’m used to men and women with only one breast, and indeed persons with “breasts” are so rare that it’s hard to believe that a word was coined for them. A pack, a big pack, of chicken breasts is a possibility; but to tell the truth, I doubt if even a circus side show has ever exhibited a person with more than one breast. At this point I was feeling a strong need for some old-fashioned sensibilities, so I checked my Webster’s Seventh and found that it gives two archaic meanings for this word. And then it gives the meaning I had in mind: “vigorously or healthily plump; specif full-bosomed.”
Posted by McWort at 9:55 PM