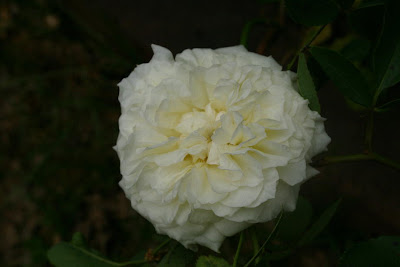 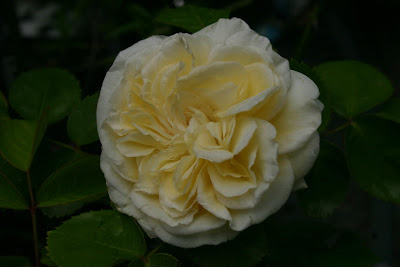 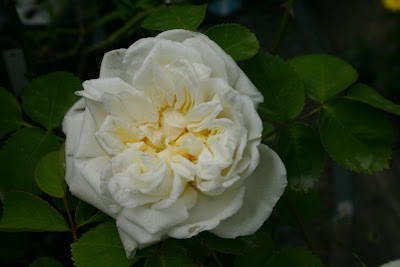 Here are three similar roses, roses which have long been favorites wherever they can be grown. The images above are stacked in chronological order: on top is ‘Lamarque’, a tea noisette raised in 1830 and one of the most popular roses during the nineteenth century. Next comes the climbing form of ‘Devoniensis’ a climbing tea rose. The bush form was raised in 1838, the climbing sport was introduced in 1858 . This climbing ‘Devoniensis’ has a suffusion of soft peach color in addition to the soft yellow. I’m enjoying both of these now from newly received plants, but I really don’t expect either to become well established in the garden without extensive winter protection and a carefully chosen site.


The third rose is ‘Albéric Barbier’ of 1900. This flower opened during relatively cool weather and thus shows a suffusion of yellow in the center. On the rare occasions when the weather conditions are just right, the flowers open pale yellow; in typically warm weather the flowers open white with no trace of yellow.

It was only when I noticed the suffusion of yellow in each of these roses that I began to connect them and see them in a historical context. Their recorded parentage suggests that they have little in common, yet they are much alike. When ‘Lamarque’ was introduced, roses in the modern high-centered style had yet to be developed. By the time the climbing form of ‘Devoniensis’ was introduced, the roses which were to become known as hybrid teas were already making the rounds. And by the time ‘Albéric Barbier’ was introduced, it must have seemed a bit old-fashioned from the start.

Much as the flowers look alike, the fragrances of these roses are different. ‘Lamarque’ is sweet tea, ‘Devoniensis’ is tea with added sweetness and body, ‘Albéric Barbier’ is refreshingly tart green apple.

'Lamarque’ and ‘Devoniensis’ are results of cutting-edge hybridization in the early nineteenth century. The newly introduced tea rose (itself an old hybrid from China) was crossed with various existing European roses; the result was a sudden profusion of roses unlike any seen before. Because the potentially huge climbing Rosa moschata figured in the mix, some of these new roses were climbers by nature. These came to be known as Noisette roses or, if the tea influence was strong, tea-noisettes. Those which remained bushy, such as ‘Devoniensis’ came to be known as tea roses. When they produced climbing sports, those sports were called climbing teas rather than tea-noisettes. But the differences involved are differences of degree rather than differences in kind, and the resulting horticultural categories are highly artificial.

‘Albéric Barbier’ was the result of a similar but utterly different burst of cutting-edge hybridization nearly a century later. A newly introduced rose then known as Rosa wichuraiana was used to produce hybrids which in some ways paralleled the early nineteenth century hybrids and in other ways were very different. It’s easy to believe that those first hybridizers who used Rosa wichurana (as it is now called) had the high bar of accomplishment set by their early nineteenth century predecessors in mind: they managed to combine the grace of the early nineteenth century hybrids with a degree of vigor and cold hardiness formerly rare in climbing roses. The resulting hybrids were hugely popular for the next twenty or thirty years, and then began to slip into obscurity. Tastes have changed, but the roses themselves are as good as they ever were; and some of us are very glad indeed that so many have survived and can be grown in our gardens today.
Posted by McWort at 10:21 AM