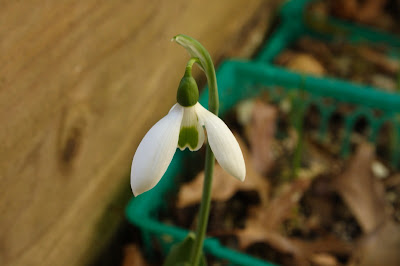 This is the snowdrop described in earlier posts as my Thanksgiving snowdrop. It's early this year, but no less welcome. Snowdrops in the autumn are not nearly as appealing to me as snowdrops in the late winter: once I got  over the surprise of seeing a snowdrop in the autumn, I realized that their chilly color was too soon a reminder of what was ahead weather-wise. In late winter, on the other hand, anything showing signs of growth and bloom has a lasting appeal for me.

'Thanksgiving' is slowly forming offsets, but it has a way to go to be considered a clump. It is probably a form of the one-spot populations of Galanthus elwesii called monostictus.

The other early winter blooming snowdrop here is the one I call 'Christmas'. This is a two-spot Galanthus elwesii.  I was looking at it today and it is already in full leaf and has formed a nice clump. But it shows no sign of bloom yet.
Posted by McWort at 1:40 PM