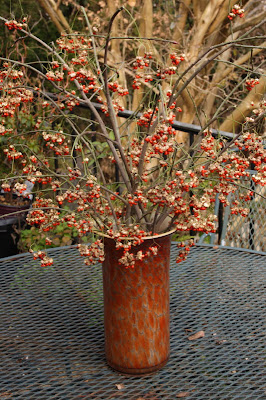 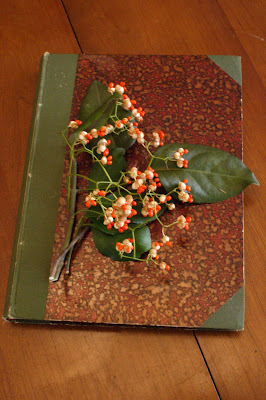 What looks like bittersweet in these photos is actually Euonymus fortunei, once one of the most highly valued plants in our gardens. It and the common Eurasian ivy Hedera helix are the only evergreen vines of merit which dependably  survive winters in the Northeast US. As a result of decades-long, successful ecesis. both have now been banished to the ranks of potentially invasive plants. Nevertheless, both are cherished in this garden for their winter effect: to my eyes an old oak festooned with ivy or the euonymus is one of the most cheerful effects our winter gardens offer.

This euonymus is a bit of a shape-shifter: the plants I bought and planted decades ago were of one of the small-leafed, restrained creeping forms, probably the one sold as 'Kewensis'.  After a while, the purchased plant of 'Kewensis' reverted to the typical wild form with three to four inch leaves and high-climbing stems. This large-leafed piece then began to climb the oak under which it had been planted. Now, decades later, it's probably fifty or so feet up into the oak. The upper two-thirds are made up of thin, sparse growth; the lowest third is broad and massive, and during the winter is one of the most conspicuous features of the garden. These events duplicate those reported for this species in the eighth edition of Bean's Trees and Shrubs Hardy in the British Isles.

In the upper picture you see some branches picked about a week ago; the leaves were removed to show off the fruit. The container is a (for me, expensive) piece of decorative glass I purchased with just this combination in mind (or rather, with bittersweet in mind - but the euonymus and bittersweet are close relatives).

While preparing the branches, the book seen in the lower picture was on the same table. I noticed how well the colors of the book cover harmonized with the green of the euonymus leaves, the orange of the glass and fruit and the polished wood of the table top: the more I looked at it, the more I liked it. So the vase, the book and its companion vegetation have been together all week. For me, it's a great example of the whole being so much greater than the sum of its parts.
Posted by McWort at 1:21 PM