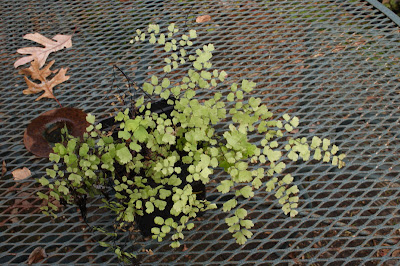 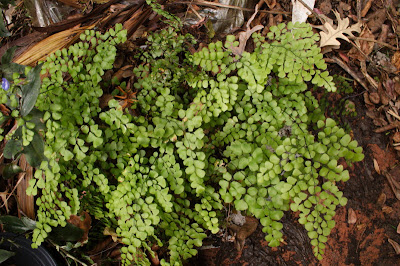 Throughout most of North America the name maidenhair fern refers to Adiantum pedatum. I'm sure I'm not the only gardener who, back in the days when I was first learning my ferns, looked longingly at pictures of the southern maidenhair, Adiantum capillus-veneris, and wished that it grew in our woods.   This southern species provides a look which is very distinct from that of the northern maidenhair. I eventually saw this species in the wild: it was during my Army days when I was stationed in central Texas. It grew at the top edge of a huge sink hole: from the floor of the sink hole I looked up and saw a fringe of green. A quick close-up look proved it to be the southern maidenhair.

Years later, some relatives of a friend bought an old house out in the country which had a collapsed greenhouse on the property. I was surprised to find a thriving colony of one of the subtropical Adiantum ferns huddled in a corner.  This was really exciting for me because at the time I did not know that there were truly hardy members of this genus other than the familiar A. pedatum. Stories of bats in the attic of the old house distracted me from the ferns, and I never remembered to collect a piece.

It would be years before two other reliably hardy Adiantum ferns came into my life. One was Adiantum venustum. This grows well here in the greater Washington D.C. area and will form broad low clumps of delicate, small,  parsley-like foliage in the open garden. That's it in the lower image above.

The other one is Adiantum × mairisii, shown in the upper image above.  Don't confuse that with Adiantum mariesii.  As I put together my thoughts for this post, I decided to do a Google search to see if I might learn more about it. I noticed that Tony Avent had something to say about it on his Plant Delights site, and so I took a look. At that point I had one of those humorous small-world experiences: Tony's account was almost sentence for sentence what I had intended to write for this post. And this was true down to one uncannily arcane detail: Tony mentions that he first learned about this fern from Nancy Swell. Too funny: so did I! Nancy and her husband used to appear at the big Green Spring sales once or twice a year back in the old days. Once I discovered her, I made a bee line to her table every year as soon as I arrived at the sale. She specialized in ferns and often had then rare Asarum, Ruscus, Danaë, Trillium and other wildflowers and botanical curiosities which piqued my interest. And it was she who introduced me to a quotation from Shakespeare: "We have the recipe of fern-seed, we walk invisible."

So far, the garden worthiness of any form of Adiantum capillus-veneris in our climate is open to question. I have three sorts on trial; they have yet to be tested by a bad winter. But the hardiness of the two shown above in not in question, and as far as I know these are our best bets for a reliable fern with the look of the southern maidenhair.