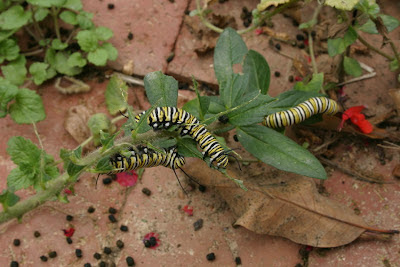 So far, this does not seem to be turning out to be a great year for monarch butterflies locally. I've seen two or three adults, but so far there are no caterpillars on the milkweed. The photo above was taken in early September last year. A day or two after the photo was taken, the caterpillars disappeared.
Casual visitors to the garden are generally clueless about plants grown to provide food for insect larvae or birds. They freak when they see a milkweed covered with caterpillars. If they are the really effete sort that faints at the sight of black-eyed-susans, they probably don't know the connection between the ragged flowers of the susans and the local goldfinches. They don't realize that there is a reason that the fritillaries are circling around the foliage of the violets.
There are those who would doubtless say that I can't have it both ways: the garden can't be both an old world pleasaunce and wildlife habitat. I can't bring myself to kill an animal just because it's a pest in the garden. And frankly, a thriving batch of caterpillars is sometimes interesting on a much deeper and more satisfying level than a bunch of plants.
However, I am about to pull up the welcome mat for deer and rabbits. But bunnies will be allowed - sometimes.
Posted by McWort at 3:29 PM