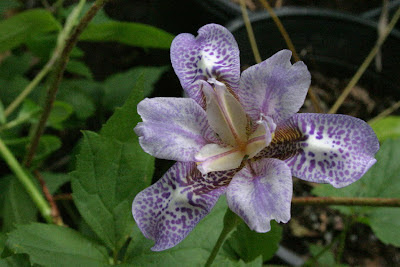 The vesper iris, Iris dichotoma is blooming now. Traditionally it was thought of as the last of the irises to bloom, although the widespread availability of re-blooming bearded irises now puts the vesper iris right in the middle of the iris season. There isn't a month of the year now in which some sort of iris might not bloom, especially in gardens where they are carefully sited to take advantage of sun and wall warmth in the cold months. A cold frame will make winter bloom a certainty.

But let's get back to August and the vesper iris. It's been placed in the genus Pardanthopsis in the past, and back in the days when the blackberry lily, now Iris domestica, was called Belamcanda chinensis, the two were hybridized to produce the "bigeneric hybrid" ×Pardancanda norrisii, sometimes called "candy lilies". The "×" (strictly speaking, the multiplication sign, as in "times" or "cross") before the name Pardancanda indicates that it is a so-called nothogenus. Nothogenera are, to put it plainly, phony genera. Nothotaxa are used in horticulture to name man-made groups which do not exist in nature.

Now that the vesper iris and the blackberry lily are both placed in the genus Iris, what should the candy lily be called? Iris × norrisii maybe? That would make it a nothospecies.

I don't see the vesper iris in local gardens very often. I like any plant which comes into bloom late in the summer: they bring freshness to the garden scene, a mid-summer reminder of the vernal profusion. And the vesper iris is beautiful, useful and interesting in its own right.

This plant is often described as a perennial, although some plants die after flowering and producing lots of seed. So keep an eye on the seed pods and hold some seed just in case. They are relatively quick and easy from seed.

Why is it called vesper iris? The term vespers survived in the English language only because until relatively recently people really did attend late day or early evening liturgical services called vespers (from the Latin word for evening). The flowers of this species do not open until late in the day - around 4 P.M. here - and evidently only last part of one day: there is no matutinal service. They are visited by bumblebees.

The forms I see now are all very much alike, but in the past seed grown strains showing color variations were grown. These included forms with more or less pink and white color. I don't know if these still exist.
If I had a big garden in the country, I would be pleased to have a long border planted thickly with the dwarf and median bearded irises, roof iris, Iris brevicaulis, blackberry lilies, candy lilies and the vesper iris - with maybe some clumps of Lycoris sprengeri and L. squamigera scattered throughout. Some re-blooming bearded iris might carry the display right into the autumn.