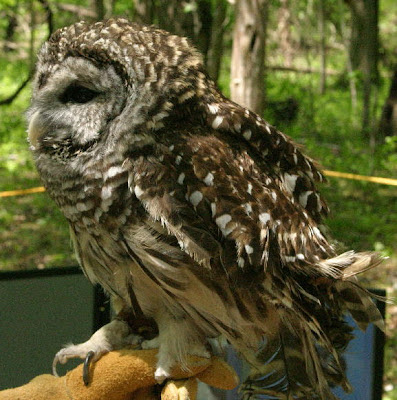 The amazing creature above is a barred owl. This one was captured as an injured bird and nursed back to comparatively good health. It's not well enough to be returned to the wild, so it spends its life as a probably reluctant ambassador of its kind to the human population at local nature functions.

Three sorts of owls live in or around the garden. I’ve seen two of these, the barred owl and the screech owl. The third, the great horned owl, I generally only hear as a somber, oddly moving call originating off in the far distance.

For several years a screech owl lived during the fall and winter in a tree near our house. In the evening, it would move into the yew hedge along the north side of the garden. There, it would trill for hours. One night we went out with a flashlight to see if we could see it. It was only about five or so feet from the edge of our deck, and sure enough, we spotted it. It was the rufous phase, a tiny mite not much bigger than a beer can with enormous eyes.

It’s easy to imitate the trill of the screech owls, and they respond to any decent imitation. One night I sat in the garden and did this for perhaps twenty minutes in the gathering dusk. Suddenly a compact bullet of a bird shot low to the ground up one of the garden paths and flew right up behind where I was sitting.

It’s easy to understand the reputation of owls for being supernatural once you’ve been around them under the right circumstances. Years ago I was hiking along the C&O Canal in broad daylight when a slight movement just above my sight line caught my attention. I looked up just in time to see a big bird the size of a chicken take flight. At that moment my hackles rose: instinctively I was responding to the otherworldly quality of what I was experiencing. There was this really big bird only a few yards from me launching itself into the air, and it wasn’t making any noise at all that I could hear. It was as if I were watching it on TV with the volume turned off. That bird was a barred owl like the one shown above.

Last winter our neighborhood became barred owl central for a while. I heard them daily; on my evening walk with Biscuit (our dog) we passed a tree from which on several occasions a barred owl flew as we passed under it. Once one called from somewhere very near my open bedroom window and woke me from a deep sleep. Then in February a pair selected a group of old pines nearby in which to carry on. The sounds they made were amazing, nothing like the appealing woodwind tones we usually hear. Each night for about two weeks I would hear these sounds which suggested a large bird being torn apart, crying and screeching piteously all the while.

Barred owls sometimes come into the garden for a brief stay, especially in the winter. On rare occasions they will sit out in the open.

The call of the barred owl has a very distinctive sound quality: it seems to stroke your eardrum in a way which is oddly pleasurable. It’s easy to do a passable imitation of their call, too. Once while Wayne and I were birding at Huntley Meadows in nearby Virginia, I was bored and decided to call the barred owls. I think this generally embarrasses Wayne, especially when I do it in shopping malls. But sure enough, after letting out a couple of calls, I got a response from the distance. Wayne didn’t miss a beat: he said it was another birder on the other side of the property doing his own owl imitation.
Posted by McWort at 9:37 PM