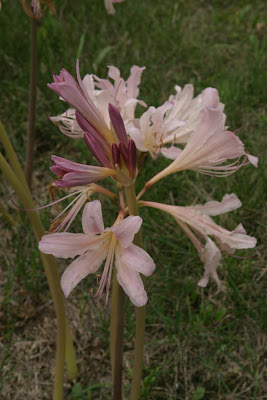 I think I stumbled on a useful word the other day. I had to make it up, but since I did that in the conventional way, it would not surprise me to discover that someone in the past had already wandered down the same path. The word is oporanthous, meaning flowering in late summer, and it describes exactly those late-summer blooming bulbs such as Lycoris which catalogs tend to misleadingly describe as autumnal. It was a question about the meaning of the word as a Latinized botanical name which led me to it; I merely anglicized it.

We don't really have a term to describe these plants, and there are several of them. A collected suite of them in a corner of the garden makes for a rush of interest before the main flush of autumn bloomers begins. Autumn doesn't start until the third week of September, and many of the plants which deserve to be called oporanthous have finished blooming in our climate by then.

Under my conditions, Lycoris are the preeminent oporanthous bulbs. Earlier this week I drove back out to western Virginia to photograph the plants of Lycoris squamigera seen there last weekend. This area is about one hundred miles west of home. I found the plants without trouble, but I had overlooked one important consideration. The small town where I was searching was essentially a bedroom community: I knocked on four doors without a single answer. I wasn't about to barge into gardens uninvited (although none was fenced), but one of the gardens was attached to a deserted house up for rent. That one I did enter and photograph. In that garden the Lycoris squamigera had been planted in a long row in a field; the row was perhaps a hundred feet long and full of bloom from end to end. I caught the plants in full bloom. They were shorter than the plants in my home garden, and the color of the flowers was a bit different, too: the pink buds showed a stronger blue flush (but not as much as is seen in Lycoris sprengeri) and the flowers in full bloom had a pink color with an underlying tawny quality in contrast to the relatively pure, cold pink color of the flowers of the plants at home. All of the plants seen in flower in this town seemed to be the same, and all together I saw hundreds of blooming scapes, perhaps a thousand. As I stood there looking at the plants, I could not help laughing: they reminded me of an incident many years ago when I was offered some pink-flowered bearded iris with the caveat that they were the color of women's undergarments.

If you have only seen Lycoris squamigera in bloom as a single blooming stem, you probably have no idea of the powerful presence it can be when blooming in its hundreds. I've known and grown this plant all my gardening life, and I'm still impressed whenever I see a freely flowering planting. And there is something touching about these mass plantings because in many cases the person who planted them is probably long gone. Such largesse is not achieved overnight. Further evidence that the plants have outlived their planter is suggested by the often odd ways they relate to the gardens which now surround them: they have the potential to be a dominant garden presence during their season of bloom, but as often as not seem to be placed as an afterthought. But the Lycoris were probably there first, and the garden which now surrounds them is probably the afterthought.

An old seed catalog I have (do any of you remember the Rex Pearce Seed Company of New Jersey?) offers seed under the name Lycoris squamigera - with the warning that supplies are dependent on their Chinese supplier. I have never heard of this plant setting viable seed, but the ways of nature are often mysterious.
Posted by McWort at 4:51 PM