More nudity in the garden 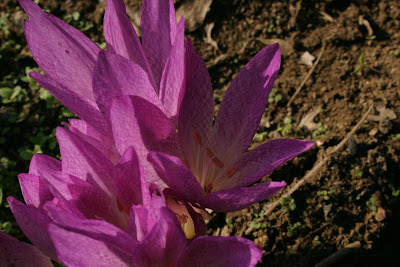 It amuses me that so many people seem to think of gardeners as reserved, dignified slow-laners. Botany in the mid-eighteenth century, improbable as it seems, was all the rage among the fashionable set. It wasn’t the plants which drew the crowd. It was the deliciously salacious nature of botanical terminology – all that emphasis on the sexual organs of plants and their functions, some of it described in language which might with equal felicity be applied to humans.

You might think that no one who has seen the underwear ads in the Sunday supplement to the newspaper would bat an eyelid at what those old books contained, but the authors of those books pursued their topics with a determination and frankness which suggests that even they might have had more than botany on the mind - more, as in political and social reform in addition to the merely naughty stuff.

So, what can we do to spice up our gardens now? I’ve never been invited to a garden party where the host read artfully selected passages from the works of Linnaeus, but who knows, it might happen. But I have planted naked ladies and naked boys, for starters. Among the more upright sorts of gardeners – probably not the ones you want to invite - these are known as lycorises and colchicums respectively. Having assembled your audience, your job is to then relate the many vernacular names in as colorful a manner as your sense of discretion allows. This recitation is best accomplished as a genteel postprandial walk through the oporanthous garden; one points shamelessly to and ogles each of the ecdysiasts as he or she is encountered. They arise tumescent and naked from the ground: there are no apparent stems or leaves to hide their glory. They blush glowingly against the bare soil of the garden.
But they are not as naughty as you might think: the naked ladies almost always depart the scene before the naked boys arrive.
In the image above is Colchicum bivonae 'Vesta', in spite of her name one of the naked boys.
Posted by McWort at 8:26 PM