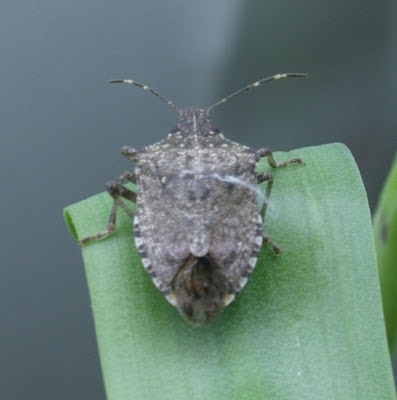 For the last several years our house has been selected by brown marmorated stinkbugs, Halyomorpha halys, as an ideal wintering place. These bugs (and they are true bugs) are harmless to humans, although in some areas they are pests of plants grown in agriculture. The stink is not always apparent, and it is not aggressively offensive when it is. But it’s not an odor you would want around food or filling a room.

As explained in the attached links, this is not a native species and has probably been in the area for only about a decade.
http://hgic.cantongroup.com/_media/documents/publications/Stink_Bug_Pest_Alert.pdf

Since they’re harmless and we’re not growing soybeans in the garden, I leave them alone. There is something oddly satisfying about having live bugs in the house during the winter. It’s akin to the satisfaction I get from pets and house plants. And it reminds me of Gilbert White's rather detached observations about the crickets and "Blattae molendinariae" which swarmed his hearth. It's interesting that he referred to crickets in English, but used Latin to describe the other; furthermore, he describes the war waged against the latter, but mentions no such activities directed against the crickets. This suggests that our aversion to the "blattae" is an ancient one. Pest species are not welcome, but others such as jumping spiders are. Jumping spiders and stink bugs share a seeming lack of concern for the presence of humans. And they both are apt to position themselves where they can look right at you. They are largely inoffensive as housemates, but that lack of fear is apt to result in close encounters. The jumping spiders seem to specialize in window sills. But the stink bugs get around. One night I was reading while eating a bowl of popcorn; I crunched down on something which was not popcorn, and my mouth filled with the distasteful stink of one of the bugs.

Stink bugs move slowly as a rule and when disturbed fly. They fly at night, too, as I discovered recently as one kept dive bombing my head during the night. Some people will pay hundreds of dollars to fly to Mexico during the winter for the privilege of eating and sleeping where insects are active. We’ve got our own, and they’re free.
Posted by McWort at 10:53 AM

You would not believe the strong feelings these bugs engender in the people whose homes they have infested. You should read the comments on this blog post of mine:
http://www.coldclimategardening.com/2007/03/11/the-brown-marmorated-stink-bug/
I am looking for an entomologist willing to do a guest post on my blog addressing some of the concerns and "solutions" these commenters have brought up.

If ya'll love living with these annoying brown marmorated stink bugs, please buy my house so I can move back to Kansas where we have only good ole tornados. I can live with them, but these bugs give me the creeps. I am serious.