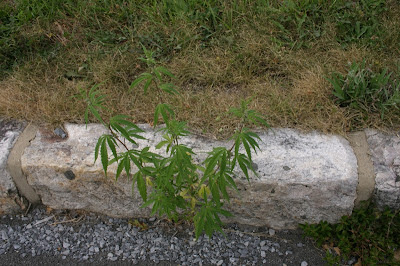 I'm beginning to wonder if I need an eye exam.

This evening I had some time to kill, so I ducked into the local Borders book store and wandered over to the gardening section. There I found a bewildering array of books, about most of which I knew nothing. My eyes glazed over as I scanned the shelves. I kept looking for something to peek into for a while to help pass the time. And then I saw them, three compact little volumes with mauve pink covers. I thought the title said "bulbs", and so I pulled one out to take a look. As soon as I got it out from the shelf I realized I had made a bit of a mistake. The title didn't say "bulbs", it said "buds" , as in marijuana buds. I sort of furtively looked around to see if anyone was watching, and quickly shoved the book back into its lair. Then I noticed that it had lots of companions: a good foot of shelf space seemed to be devoted to this topic.

Years ago I had a coworker who had heard about my interest in gardening through the grapevine. Every once in a while he would come over to talk gardening. He was interested in only one thing: growing plants under high intensity lights. I think I know what he was trying to grow. Maybe I should go back to Borders and buy that book for him. Come to think of it, maybe I should check that book to see if he wrote it.

The would-be "buds" in the image above were photographed in the parking lot of a national park. Let's reconstruct the crime scene: nearly exhausted or at any rate bored driver pulls into the lot, parks, notes the view, opens the car windows, starts to roll a joint, picks out the seeds, tosses the seeds out the window...Now fast forward several months. I drive into the same lot, equally exhausted and bored. I open the car window. I don't have any joints, so I think of something else to do. I scan the surrounding vegetation for something interesting. My eyes hit on some suspicious looking leaves growing at the very edge of the lot. Can it be...it sure is.

Months later I come back to the same lot and try to find the same parking place and the suspicious plant. It's gone: there's no trace whatever, not even a stump. Evidently I'm not the only field botanist with a well trained eye who uses that parking lot. Actually, I prefer to imagine some poor kid working as a lawn mower for the summer to save money for college hitting some unexpected pay dirt.
Posted by McWort at 12:23 PM

Email ThisBlogThis!Share to TwitterShare to FacebookShare to Pinterest
Labels: buds