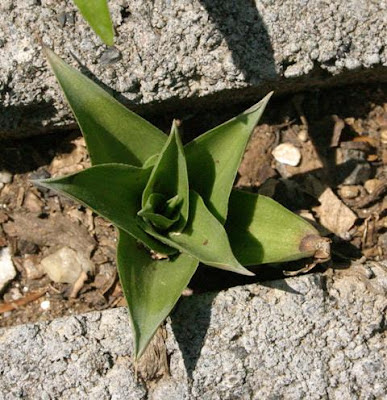 The new Heronswood catalog arrived the other day, and I noticed that they are now offering nicely spotted Agave virginica. I’ve collected this species in a small way for years, always for preference picking out forms with spotted foliage. The plant is also called Manfreda virginica, and it hybridizes readily with Polianthes tuberosa. That they hybridize suggests that the nomenclature needs some adjustment. The three genera Agave, Manfreda and Polianthes evidently are very closely related, so expect some nomenclatural shifting.

We Americans generally pronounce (i.e. mispronounce) this word Agave as ah-GAV-ee or ah-GAHV-ee something like that. Sometimes I hear ah-GAV, too. But those pronunciations don't come close to the original. It’s a classical Greek word which means "noble" or "illustrious" (thank you Liddell and Scott); transliterated it’s agaue or agave. Why the variation between u and v? Whenever there are three vowels in a row, something is likely to give. It’s too hard to articulate three vowels one after another without intervening consonants. In this case, it’s really more a case of one diphthong (the au) followed by a vowel (the u, which it should be pointed out is not the “vowel” we call u in English but rather the sound oo as in moon). What happens in this case? One of the vowels, the “weakest” one, takes on the qualities of a consonant. This typically happens with the vowel i which becomes its consonantal avatar, j, or u which becomes its consonantal avatar v. To understand this, you have to keep in mind that the i, j, u and v sounds in question are not the sounds represented by those symbols in English, but rather the sounds they represent in classical Greek and Latin. The j represents the sound of the y in yellow; the v is the w sound.
Purists will note that the classical Latin alphabet does not have a letter j, nor strictly speaking did it have a letter v for much of its history. Those characters came into use as a shorthand way of indicating that what linguists sometimes call a “glide” occurs where an i or a u is sandwiched between other stronger vowels. Those of you with a love of language should take a look at the previous sentence. It’s a good example of why it’s hard to explain these things in everyday speech. I wrote “where an i or a u is sandwiched”. Should I have written “where an i or an u is sandwiched”? Obviously, when I first wrote it I was thinking in English, and so wrote “a u” rather than “an u”. But after I wrote it I realized that the sounds I was talking about (and this is all about sounds, with the consequences for spelling of secondary importance) are the sounds of Latin. So thinking in Latin this time, and with a tweak to make that clear, the phrase is “ where a Latin i or an u is sandwiched…” That won’t make any sense to you unless you pronounce the u in "an u" as “oo”.

And so how do I pronounce Agave? How about ah-GAH-way?

The image above shows one of the rather ordinary plants now in the garden.
Posted by McWort at 7:47 AM