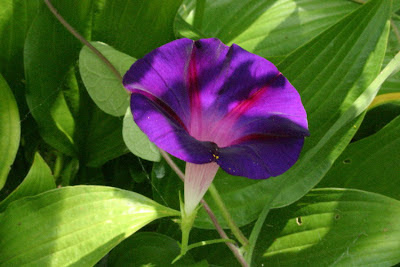 This is the time of year when I begin to have vivid daydreams about morning glories, nasturtiums and poppies.

Today I collected seed of the small-flowered purple morning glory which has self-sown itself in this garden for years. I don’t know the origin of this plant. It just appeared one year, and since then it has made itself at home here and there in sunny places in the garden. Left to its own devices it’s weedy, but it’s easily controlled.

One of these years I want to plant a wall of this morning glory with cleome in front of it. There was an accidental close approach to this planting in the garden several years ago – the cleome and morning glory were both volunteers. The colors harmonize beautifully.

I don’t know the name of this morning glory, and I can’t match it exactly with pictures in seed catalogs. Among the candidate names are ‘Star of Yelta’, ‘Grandpa Otts’, ‘Kniola’s Black’, ‘Kniola’s Black Knight’, ‘Kniolians Black’
Posted by McWort at 4:54 PM