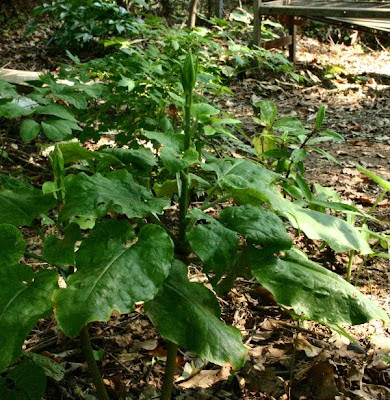 Most of the typical lilies, the members of the genus Lilium, are only now just beginning to poke above ground. The martagons are an exception: Lilium hansonii is already about a foot out of the ground and ‘Preston Yellow’ is not far behind.

The plant in the image above is Cardiocrinum cordatum, shown in late June of 2004 as it was about to bloom. This year the plant seems unusually robust; it already has a salad-plate sized rosette of foliage up. At this stage it looks a bit like skunk cabbage. Will it bloom this year? It has bloomed twice here in the past.

This plant is above ground for a relatively short period of time, generally about three months. Non-blooming plants sometimes die down for the year just when the true lilies are coming into bloom. It last bloomed here in early July of 2004.

The structure of this plant is odd. The leaves are arranged in a false whorl about halfway up the stem. A few scattered leaves appear above the false whorl. At this time of year the foliage appears to be acauline, but later the annual stem will raise the false whorl up to about 12 to 18” above the ground; the flowers will be at the three or four foot level.

Contrary to what one reads in much of the gardening literature, Cardiocrinum are not monocarpic. A friend recently showed me a newspaper article from a major newspaper in which this misunderstanding was repeated.

The image above was made shortly before the plant bloomed in 2004. Let’s hope that there will be new images of blooms in a few months.
Posted by McWort at 11:22 AM