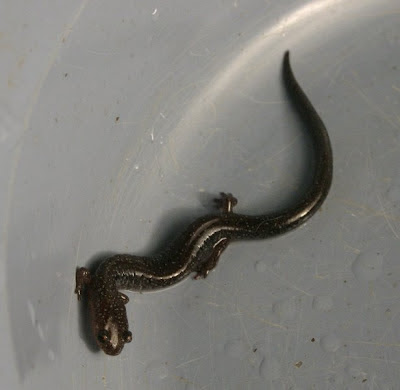 It rained all night the other night; when I went to bed we were under tornado warnings. The rain was heavy at times, and as expected there was seepage in the basement. I had taken up the rugs as a precaution.

That the garden the next morning was full of newly emerged sprouts did not surprise me. But the little one waiting for me on the front porch did. This is Plethodon cinereus, variously called the red back salamander, the red backed wood salamander or combinations thereof. Yes, it has two color phases, and this is the dark gray/black one. But look closely: it really isn’t black: it’s sprinkled with very fine gray speckles.

This is probably one of the more abundant amphibians in our area. But it is above ground only during a brief period in late winter-early spring and again in the fall. It’s very unusual to find one during the summer, and who’s looking during the winter?

If you are standing up and looking down, they look a lot like earthworms. When you take a closer look, you can see the tiny legs and the eyes.

Years ago I had a big collection of bromeliads which spent the frost-free season outside on the patio. During late October and November, it was not unusual to find these little salamanders crawling all over the bromeliads. This was particularly interesting because Plethodon has a Neotropical relative called Dendrotriton which is evidently adapted to life among bromeliads.
Posted by McWort at 8:17 PM