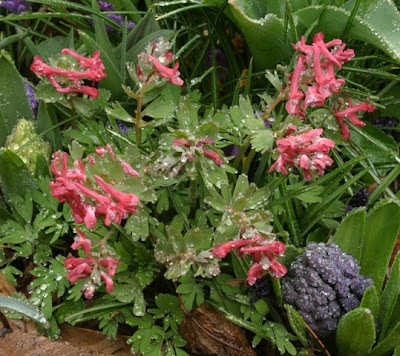 The genus Corydalis is represented in this garden by several species. Those growing here are mostly rather inconspicuous plants of soft colors. The form shown here is one of the older cultivars of bright coloring.

The world of garden Corydalis is roiling. A few decades ago, only a few of the drabber wild forms were likely to be seen in American gardens. With the appearance of Janis Ruksans' list, we finally have access to some of the very numerous cultivars being developed in Europe.

The name of this plant illustrated is variously given as 'George Baker', 'G. P. Baker', 'George P. Baker' and so on. Beautiful and easily grown they are, but their garden effect is fleeting.
Posted by McWort at 12:23 PM